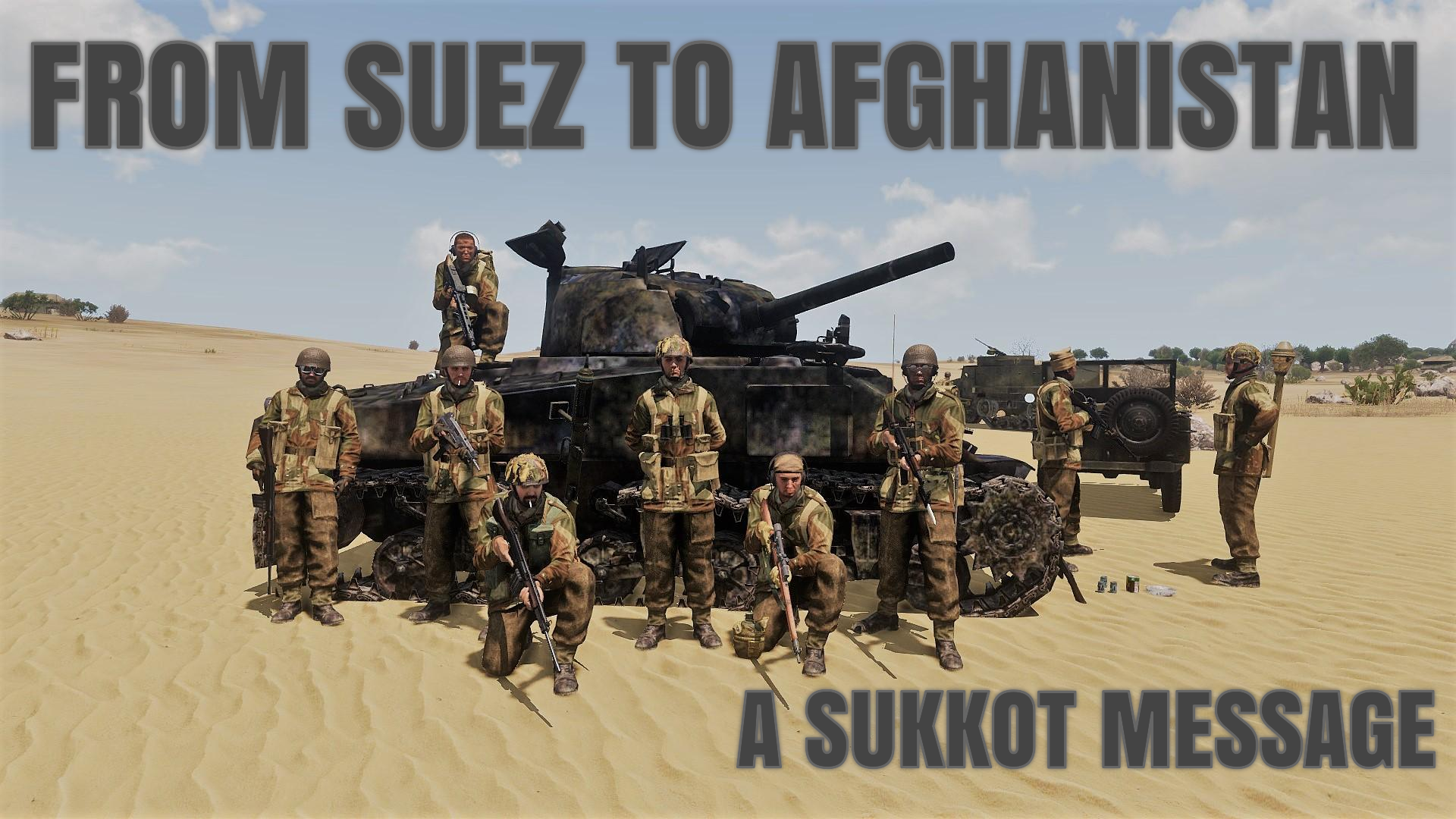 After watching the recent Afghanistan debacle unfold, I could not help but be reminded of the Suez Crisis of 1956 – with a sense of foreboding and terror about what the future holds for those who treasure the freedoms and comforts of the Western world.

Truthfully, it wasn’t the shocking scenes of Afghan citizens desperately running alongside a U.S. military cargo plane at Kabul airport that I found so discomforting, although that image has seared itself on my mind forever; nor was it the shocking revelation that the US military has left billions of dollars’ worth of military hardware in Afghanistan, weaponry that is now controlled by an evil terrorist regime.

For while it is true that these aspects of the withdrawal do send a chill down my spine, they are not the cause for my doomsday premonition. Rather, it is the specter of Suez that hangs over Afghanistan which gives me sleepless nights and makes me fear for the future of the free world.

The Suez Crisis of 1956 is best remembered for the precipitous downfall of its main cheerleader, UK Prime Minister Anthony Eden (1897-1977), until then one of Great Britain’s most highly regarded politicians and statesmen. The crisis began on July 26, 1956, after Egypt’s populist president Gamal Abdel Nasser (1918-1970) nationalized the Suez Canal, one of the world’s most important waterways, then owned by the Suez Canal Company, a commercial entity controlled by French and British interests.

Nasser’s provocative decision had been precipitated by an American and British decision not to finance the construction of Aswan Dam, a consequence of Egypt’s growing ties with the Soviet Union. Nasser was furious and took his revenge by seizing control of the canal with the idea that Egypt could use revenue from the thriving shipping trade to pay for the dam’s construction. But Britain and France were determined to thwart Nasser’s unilateral seizure of their asset, and decided that Nasser had to be taught a lesson. They secretly planned a military campaign together with Israel to regain control of the canal, and to also effect regime change in Egypt.

After a pre-agreed Israeli invasion of the Sinai in late October, and the inevitable conflict between Israeli and Egyptian forces which followed, the Anglo-French alliance declared the military confrontation a casus belli, and in early November sent their armies to occupy the canal, wresting control of the territory from the Egyptians.

But the Suez campaign turned out to be a gross miscalculation. U.S. President Dwight Eisenhower – who had not been informed of the plan in advance – was horrified, believing that the Anglo-French invasion would be widely perceived as an egregious example of Western imperialism, driving Egypt and other Arab nations into the arms of the Soviet Union, who were eagerly looking for a foothold in the Middle East.

The U.S. administration, in a rare show of cooperation with the Soviets, secured a UN resolution condemning the invasion while simultaneously refusing to sell oil to the British, whose supply of oil was severely curtailed by the blockage in Suez – all of which forced the British and French armies into a humiliating withdrawal. Eden, once celebrated as Churchill’s right-hand man and as the wisest of diplomats, was compelled to resign his premiership with his reputation in tatters.

At the time, besides for Eden’s dramatic fall from grace, the Suez Crisis outcome was widely perceived as an unequivocal success. The United States, with the help of the United Nations and by using its considerable leverage with the UK, had succeeded in preventing wholesale bloodshed, while the international economy emerged largely unaffected, possibly even improved, as a result of the internationally sanctioned resolution. Both the United States and the Soviet Union had behaved responsibly, acting together to ensure that this kind of foreign military adventure – which only benefited superpowers, while less adept countries took the brunt of hostilities – would no longer be tolerated by the new international order. Everyone breathed a sigh of relief.

But how wrong they all were. An emboldened Nasser went on to use his victory against Great Britain in particular, and the weakness of the West in the face of his belligerence in general, as proof that if the mouse roars loud enough, the mightiest lions will slink away. Eden was utterly convinced of this awful consequence, telling an interviewer in 1967 that he was “unrepentant” for having initiated the Suez campaign, and that he believed Nasser was a postwar incarnation of Hitler – forcing the West into retreat had simply encouraged him and other Arab leaders to arm their countries which had, in turn, gravely threatened peace in the region.

Eden’s biographer, D.R. Thorpe, was far more blunt; in his book Eden: The Life and Times of Anthony Eden (London, 2003), he wrote: “Had the Anglo-French venture succeeded in 1956, there would almost certainly have been no Middle East war in 1967, and probably no Yom Kippur War in 1973.”

The difference between the humiliating climbdown and troop withdrawal by Great Britain in 1956, and the shameful fiasco of the U.S. withdrawal from Afghanistan in 2021, is that by 1956 the British Empire was already in steep decline, and while the Suez Crisis may have been the catalyst for a faster descent into oblivion, it brought into sharp focus just how toothless the once-mighty British tiger had become.

By contrast, the United States of America is ostensibly still the world’s mightiest superpower, a position it has held for decades, and to see it disgraced and sent scuttling out of a country, leaving an unholy mess in its wake, reveals just how ephemeral and evanescent that power really is. Historians will one day look back at the Afghanistan withdrawal and cite it – as they do the Suez withdrawal for Britain – as the moment when the penny dropped, and the American king was seen with no clothes.

The Jewish calendar cycle includes a festival called Sukkot, celebrated each year in the early autumn. We build a temporary outdoor structure, using leaves or branches as a roof. For an entire week this hut becomes our home: we eat in it, we spend family time there, and many of us even sleep in the sukkah.

Custom demands that we decorate our sukkah – and the interior of some sukkahs can be elaborate and even ornate, with beautiful drapes and artistic images covering the walls, and fabulous decorations suspended from the ceiling. But then, once the Sukkot week is over, each sukkah is dismantled and the lovely interior that was our home for seven days is gone.

One of the most frequently asked questions about Sukkot is why it takes place in the fall, and not in the spring, when the weather is more suited to the outdoor aspects of the festival. Answers are abundant, but the answer that has always struck me as particularly sharp is the one suggested by Rashi’s grandson, Rabbi Shmuel ben Meir (1085-1158; “Rashbam”).

He suggests that God deliberately chose the fall, after the harvest is over, when an agricultural society feels most successful and complacent. The storehouses are full, life is good, and there is nothing to be worried about. It is exactly now that God asks us to leave the comfort of our homes and spend some time in a temporary dwelling – although, despite their ramshackle transience, we are expected to decorate and make them as nice as our permanent homes, or even nicer. And then, after being in them for a week, we dismantle them completely, and they’re gone.

As we approach the winter, God wants us to be aware just how temporary our livelihood and security really is – or can become; it’s here one day, and gone the next. Because, in the final analysis, it is not our status, our homes, our possessions, or our strength that give us security – it is God. And all of it can be gone in the blink of an eye.

All of us in the Western world are endlessly dazzled by our prowess and self-diagnosed superiority, as we navel-gaze and shoot the breeze on every topic besides for our own existential vulnerability, while at the same time the barbarians are at the gate waiting to turn our harvest festival into the harshest winter we have ever experienced.

That’s why we need Sukkot – so that we spend time reflecting on just how quickly our world can turn upside-down and be gone, with the edifice that is our home taken apart, leaving us to face the elements without the protection we took for granted. It is this Sukkot phenomenon that should have been the strategic takeaway of the Suez Crisis. Had that been the case, the Afghanistan situation might have unfolded quite differently. And this time the stakes are far higher, which is the reason I am so worried. Let us all hope and pray for a mild winter, and that spring comes much earlier than expected.