DOUBLESPEAK AT ITS WORST 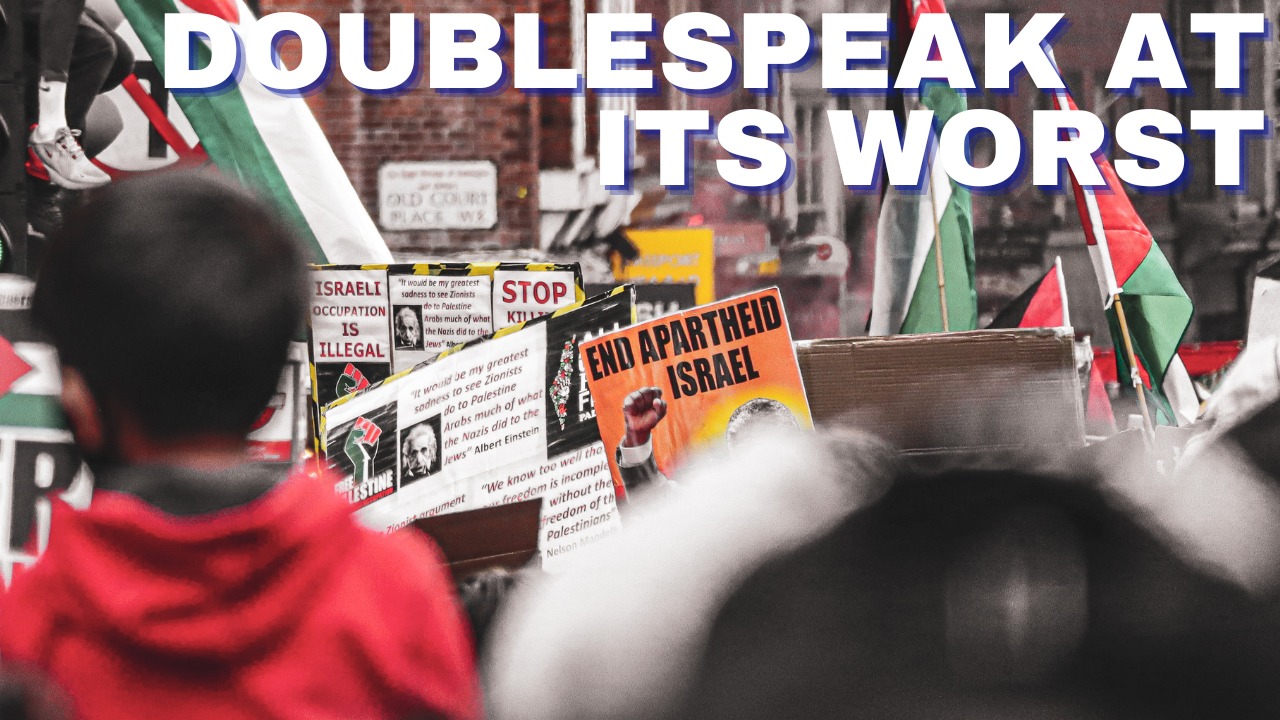 The end of this month will mark 75 years since the passing of U.N. resolution 181 on November 29, 1947, which paved the way for a Jewish national homeland to be established in Palestine as an independent, legitimate country – a nation-state among the family of nation-states that make up the United Nations. Israel came into being just under half a year later, on May 14, 1948, and the following year, on May 11, 1949, Israel was admitted into the United Nations.

For reasons that continue to defy logic, the Arabs of 1947 Palestine – bolstered by active encouragement from their Arab brethren in the Middle East and beyond – refused to consider any option which would enable the creation of a Jewish nation-state on land they believed belonged exclusively to them.

And yet, despite the truth of these facts, the narrative one reads and hears in the mainstream media and from pro-Palestinian propagandists never reveals these critical details. The delegitimization of Israel relies on the spurious mantra that Israel was never legitimate, and that the Jewish nation has no valid claim to a country in the land that was previously Palestine.

And, as if this is not enough, the anti-Israel narrative maintains that the Arabs of Palestine were illegally dispossessed and that they remain dispossessed – all of them victims of a colonial enterprise executed by non-indigenous outsiders who stole the land from the Arabs.

But nothing could be further from the truth. While it is true that Arabs settled and dominated Palestine – which in the modern period was an ill-defined province of the Ottoman Empire, it was the Jews who were dispossessed, some 2,000 years ago.

And it was the Jews who were a perpetually persecuted minority in the territory which was theirs for more than fourteen centuries, beginning with the conquest of Joshua, and ending with the destruction of the Jerusalem Temple in 70 C.E., followed by the rout of Bar Kokhba and his rebels in 135 C.E.

And it was the Jews who were associated, throughout the period of their dispossession, with the province known as Palestine – even by Muslim scholars of the Koran, as pointed out by, among others, the widely respected British imam, Sheikh Dr. Muhammad Al-Husseini.

How is it possible that the truly dispossessed can be accused of dispossessing others when they reclaim territory that is rightfully theirs?

What this means is that anyone who proposes Israel’s illegitimacy is simply guilty of Orwellian doublethink – at its worst. As Winston Smith, the protagonist of George Orwell’s masterpiece Nineteen Eighty-Four, puts it: doublethink is “to be conscious of complete truthfulness while telling carefully constructed lies.”

The truth of the Land of Israel’s association with the Jewish nation cannot possibly be disputed – it is a fact no less true than that the sky is above, and that water is wet.

The first evidence we have for this eternal connection between the Jewish people and the Land of Israel is in Parshat Lech Lecha, initially and most strikingly in the verse (Gen. 13:15) when God informs Abraham: כִּי אֶת כָּל הָאָרֶץ אֲשֶׁר אַתָּה רֹאֶה לְךָ אֶתְּנֶנָּה וּלְזַרְעֲךָ עַד עוֹלָם – “the entire land that you see is given to you and your offspring—forever.”

But there is another reference, equally important, that refers specifically to the dispossession of the Jews. This reference clearly acknowledges that the land will remain Jewish even during the period of dispossession and that the Jews will return to their land in due course.

A little later on in Parshat Lech Lecha, God enters into a covenant with Abraham – promising him children, and that his descendants would inherit the land. But Abraham seems unsure, and he seeks an assurance from God that these promises would indeed happen. “How do I know that I will take possession of [the land],” he inquires.

The commentaries are all shocked by Abraham’s question – but perhaps more shocking is the seeming lack of any answer. Meanwhile, God appears to ignore the question, and instead segues into a prophecy about the period of slavery in Egypt.

Not so, says Rabbi Yaakov Moshe Charlap (1882-1951) – devoted student of Rabbi Avraham Yitzchak Kook (1865-1935), and founding rabbi of the Shaarei Hesed neighborhood in Jerusalem. The verse in question (Gen. 15:13) has God telling Abraham, “just know that your offspring will be strangers in a land that is not theirs.” And while it is true that the simplest interpretation of this verse is that God designated Abraham’s query as a lapse of faith, for which his descendants would need to endure a period of exile, there is another interpretation that is far more compelling.

According to Rabbi Charlap, this verse directly answers Abraham’s question. Rather than ignoring Abraham, God was telling him that even when his descendants would have to endure periods of exile, it would be in a land that was not theirs and would never be theirs – because the only land that was theirs, now and forever, was the land that God had promised him.

The Jewish exile may last for centuries and millennia, as indeed it did, during which Jews would be a minority in countries controlled by others, sometimes integrated, and at other times persecuted. But at the end of it all, those countries would belong to other nations, and the only Jewish country will be the country from which Jews were dispossessed. That country – Eretz Yisrael – is the country that we have always called home, and that country – Eretz Yisrael – will remain our home forever. It really is as simple as that.