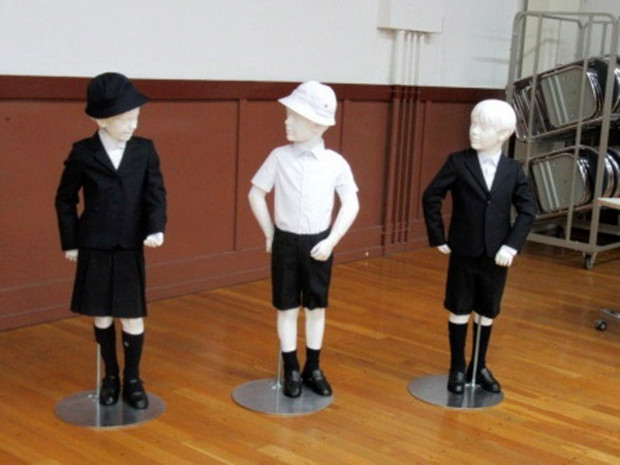 Parents of children attending the prestigious Taimei Elementary School in Tokyo were recently shocked to discover that buying a new school uniform for their children will set them back a staggering 80,000 yen (around $700).

Although the school is state-funded, it is located in the luxury shopping district of Ginza – home to Tokyo’s equivalent of Rodeo Drive – and enrolment is extremely competitive. It would appear that the school’s administration took this coveted exclusivity to a whole new level by commissioning designer label Georgio Armani to design their new uniform—resulting in the hefty price tag.

Unveiled just a couple of weeks ago, the uniform includes a chic hat and a cute looking bag. But no one from the school’s administration seems to have allowed for the fact that as wearing the uniform is mandatory, each child must own at least two full sets, if not more, and depending on how many school-age kids a family has, this can turn into a major financial burden.

Irritated parents launched a campaign against the innovation, and last week the furor was raised at a session of the Japanese parliament, forcing government ministers to apologize.

The saga began back in November, when headmaster Toshitsugu Wada informed parents of the uniform change in April, which is the start of the Japanese school year. But none of the parents expected a designer collection, and certainly not a uniform designed by Armani—whose Japanese head office is conveniently located just two hundred yards from the school.

“I was surprised such luxury brand-designed uniforms were picked for a public elementary school,” one unnamed mother told HuffPost Japan, adding that she was “worried the wrong notion that something expensive is good and something cheap is bad could be imprinted on children.”

A noble ideal, which captures one of the essential values represented by sartorial uniformity, a practice that has all but disappeared in American schools. Although, maybe that is about to change. Starting next school year, all public-school students in South Carolina will be required to wear school uniform, if a bill currently being tabled is voted into law.

There is endless data to demonstrate that buying stuff for kids ahead of a school year costs parents many hundreds of dollars, and often thousands. In the case of teenagers, much of this money is spent on new clothes. Step in South Carolina state lawmaker Cezar McKnight, who is proposing that all students attending state schools wear the same outfit, and that the uniform in question be limited in cost.

The bill also proposes that students from low income families be provided with five sets of uniforms free-of-charge. “If they all wear uniforms, the children who can’t afford the really nice clothes won’t have to be ashamed of what they’re wearing,” one mother said.

The preamble to the bill details the phenomenal peer pressure that sees parents laying out small fortunes on designer clothes for their kids to wear at school. Although, despite this reality, not everyone agrees with McKnight’s bill.

“If I’m going to spend money, I’m going to go out and buy what my kids want,” another mother told a local newspaper. “Kids should have the freedom to wear whatever they want to school.”

An enterprising student has even launched a petition to stop the bill, which, if it is passed, will result in mandatory statewide school uniform as early as this coming August.

Neither required clothing nor uniform appearance is a hallmark of Judaism.

I recall hearing from former British chief rabbi, Lord Jonathan Sacks, that he once attended a United Nations religious leadership conference at the invitation of the World Council of Religious Leaders. It was at this meeting that he discovered that Judaism is unique in not having a formal dress code for its religious leaders. At the closing session, every faith leader was asked to attend in their official vestments for the purposes of a group photo.

It suddenly dawned on Rabbi Sacks that he didn’t have anything in particular to wear, and in the photo he appears alongside dozens of other clergy, almost all of them in flowing robes and garments of every color imaginable, while he is dressed in a plain suit and tie—almost the only one without some external vestige of his faith role.

It is a remarkable observation, and what would appear to be obvious exceptions in the way rabbi’s dress are in fact further proof of the fact. For example, the elaborate costume worn by contemporary Sephardic chief rabbis of Israel is a throwback to the uniform worn by Jewish religious leaders of the Ottoman Empire, while the striking garb worn by Hasidic leaders (and their followers) can be traced back to the clothes worn by eighteenth century Ukrainian and Polish noblemen.

There is, however, one exception, even if it has no contemporary application — the clothing prescribed for priests while they performed the duties of the Temple, described in detail in the Torah portion of Tetzaveh (Ex. 28:2): וְעָשִיתָ בִגְדֵי קֹדֶשׁ לְאַהֲרֹן אָחִיךָ לְכָבוֹד וּלְתִפְאָרֶת  – “you shall make sacred garments for Aaron your brother, for honor and for glory.”

The Or Hachaim commentary notes that these clothes, however intricate and beautiful they may have been, were not important in-and-of-themselves, evident from the fact that Moses was not required to wear them during the first week after the Temple was ready, before Aaron and his family took over.

Priests were expected to serve the people, and to help atone for their sins, both sins of faith, as represented by God’s elevated name, and sins of human weakness, characterized by God’s other name.

The garments acted as a reminder of this dual expectation, a clear demonstration that drawing inspiration from one’s clothing is the true purpose of any uniform, something it is safe to say could never be achieved with an outfit designed by Armani.