THE CURSE OF ATTENTION SEEKING 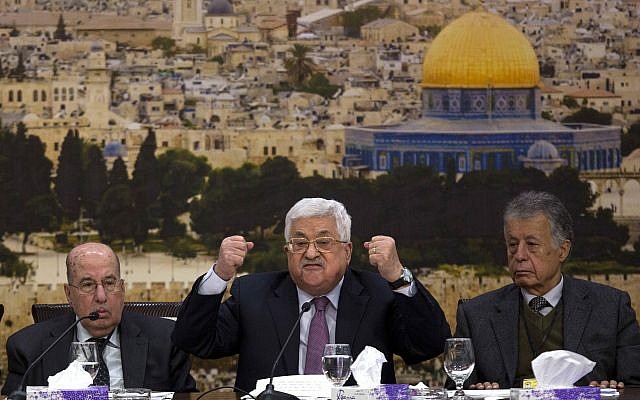 Earlier this month, Mahmoud Abbas called together a meeting of the PLO’s Central Council, and delivered a speech marked more by its rancor than by its accuracy.

For well over two hours Abbas ranted against a whole range of characters, both historical and contemporary, whom he blamed for the dire situation of his people.

According to Abbas, it all began with Oliver Cromwell, who “staged a coup against [King Charles I of Great Britain] and became the head of a republic… 300 years prior to the Balfour Declaration.” It was Cromwell who “came up with the idea of transferring the Jews from Europe to the Middle East… because they wanted this region to become an outpost to protect the interests and the convoys coming from Europe to the East.” According to this twisted narrative, Jews were the expedient pawns of colonialist expansion.

Next up on the blame list was Napoleon Bonaparte, who, in Abbas’s alternative universe, had declared that “a Jewish state must be established in Palestine,” only thwarted in this aspiration when he “failed at the walls of Acre”, a victory Abbas claimed for the Palestinians, even though no such national entity appeared until the second half of the twentieth century.

This fantasy thesis, popular among anti-Zionist pseudo-historians, is based on a French newspaper article of May 1799, which reported that Napoleon had invited “all the Jews of Asia and Africa to gather under his flag in order to re-establish the ancient Jerusalem.”

Most respectable historians dismiss this as a wartime rumor, and even those who take the report seriously consider it a tactical gesture by Napoleon, who hoped such a declaration would help tip the battle of Acre in his favor. In short, no serious academic believes Napoleon was a proto-Zionist.

The rest of the names on the Abbas hit list were equally bizarre: Warder Cresson, first United States consul in Jerusalem, later a convert to Judaism and founder of an agricultural settlement in Palestine, but by no means a political operator; Colonel Charles Henry Churchill, a nineteenth century British diplomat in Damascus, who Abbas erroneously identified as Sir Winston Churchill’s grandfather; Sir Henry Campbell-Bannerman, a British prime minister who is spuriously purported to have authored the “Campbell-Bannerman document” in 1907, proposing the creation of a buffer state in the Middle East to serve European interests by preventing Muslim nations from gaining an upper hand in world affairs.

The list of crimes and criminals goes on. David Ben Gurion forced Jews to move to Israel after its creation (as if you can force Jews to do anything); American air carrier TWA transferred 50,000 Jews to Israel from Yemen as part of a US conspiracy against the Palestinians; referring to the Palestinians as terrorists is willful misrepresentation; Palestinians have never rejected negotiations.

Abbas’s rambling speech presented an alternative reality that is utterly deranged, and its author is clearly unhinged.

This week, former US Secretary of State John Kerry sent Abbas a message to “hold on and be strong” in his resistance to President Trump, proof that even senior diplomats fail to understand the level of cognitive dissonance prevalent in the Palestinian narrative.

“Maybe it is time for the Palestinians to define their peace principles and present a positive plan,” Kerry suggested.

Really? On what planet? No Palestinian who believes in a Zionist conspiracy dating back over 350 years is ever going to “define peace principles”, nor will a Palestinian fantasist such as Abbas ever come up with any kind of peace plan.

But, I hear you say, surely the Palestinians want to end their miserable existence as the perpetual victims of the modern era?

Actually, that is exactly what they do not want. This dawned on me as I studied a Midrash addressing an anomaly at the beginning of Beshalach. The portion begins (Ex. 13:17): וַיְהִי בְּשַׁלַּח פַּרְעֹה אֶת הָעָם – “and it came to pass when Pharaoh sent away the nation.”

The Talmud (Meg. 10b) has a principle that whenever the Hebrew word “vayehi” is used in scripture, it indicates the beginning of a sad story. And yet, surely a chapter that ends with the destruction of the entire Egyptian army is happy, not sad? In which case, why does it begin with a negative opening word?

The Midrash explains that the opener reflects Pharaoh’s perception of events, and offers an analogy to explain. Someone kidnaps the son of a mighty king. The king sends him letters and messages to release his son, but the kidnapper takes no notice. Eventually, the king comes to the kidnapper’s hideout and rescues his son. Afterwards, the kidnapper complains that while he had held the prince he had been the recipient of daily communications from the king. With the prince gone, the king was ignoring him.

Pharaoh was upset. For months he had interacted constantly with God, via Moses and the ten plagues. With the Jews gone, God was ignoring him.

This Midrash is extremely peculiar, and appears to suggest that Pharaoh enjoyed being God’s victim, craving the negative repercussions of God’s daily attention. How does this make any sense? Actually, it shows a remarkable understanding of a well-known psychosis associated with both a range of personality disorders and Munchausen’s syndrome, in which attention-seeking is achieved by chronic victimism.

Pharaoh realized that after the Exodus, God was no longer interested in him and his nation. He therefore manufactured a situation that would demand God’s attention, even if it meant utter devastation and disaster.

Abbas is a modern day Pharaoh, craving the world’s attention. But the world has passed him and his people by. He therefore wishes to perpetuate a narrative of wanton victimhood stretching back centuries, and involving multiple international actors, so that the Palestinians continue to attract the attention of world players.

Defining peace principles and coming up with a definitive peace plan would end the attention forever. That is something the Palestinians cannot and will never accept.

Photo: Palestinian Authority President Mahmoud Abbas speaks during a meeting with the Palestinian Central Council, a top decision-making body, at his headquarters in the West Bank city of Ramallah, January 14, 2018. (AP Photo/Majdi Mohammed)