CAN A SECRET BE A NON-SECRET 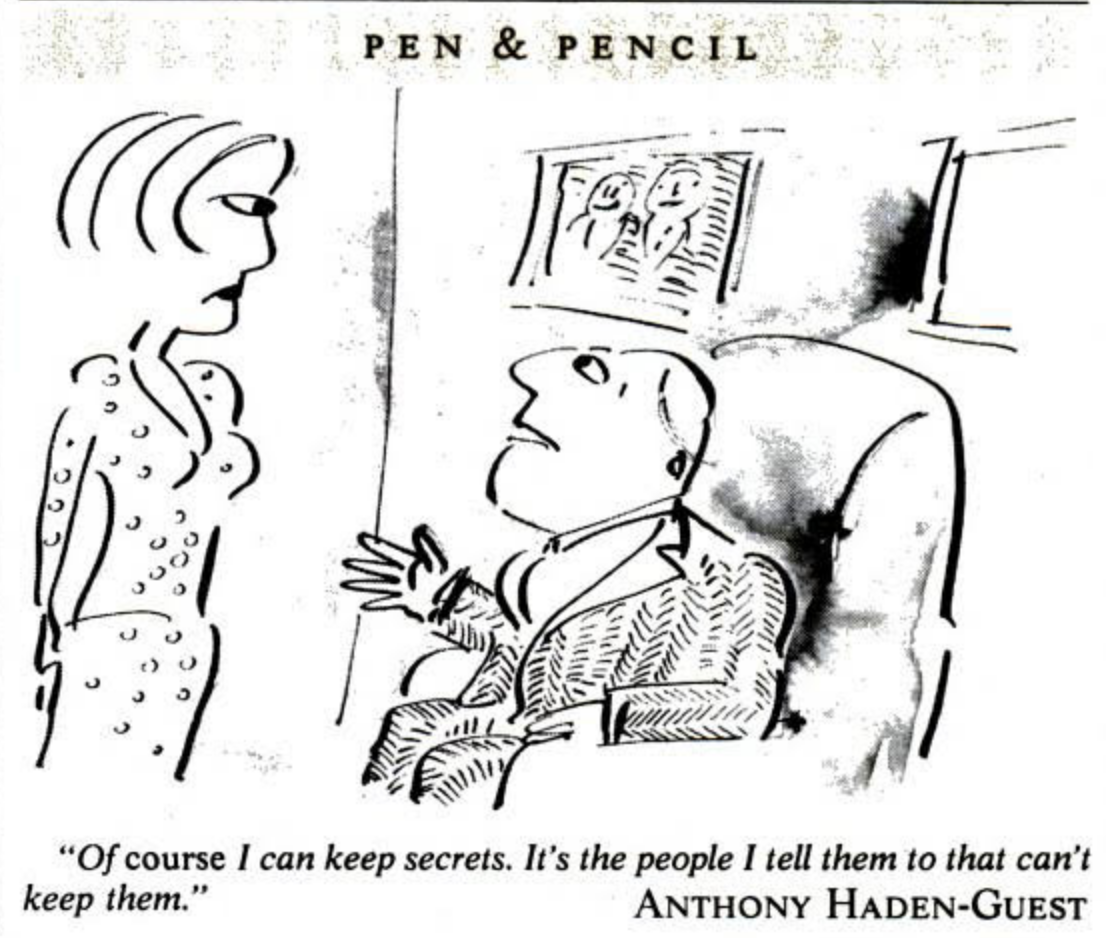 The infamous bon-viveur, Anthony Haden-Guest, is purported to have once told a friend, “of course I can keep secrets; it’s the people I tell them to that can’t keep them.”

Haden-Guest was certainly aware of the inherent contradiction in this remark, no doubt the source of much merriment when he said it. By definition, a secret is something you tell no one; once you share it, the secret is no more. Consequently, it is impossible for something to be a secret and not a secret at the same time. Or is it?

It would seem pretty obvious that if something is true it cannot simultaneously not be true. And yet, Greek philosophers saw fit to delineate this idea in the first two fundamental rules of classical logic, which Aristotle referred to as the axioms of human thought.

The first is the law of non-contradiction, which states that for all propositions (p), it is impossible for both “p” and “not-p” to be true. Just as an example, this means that if something is wet, it cannot also be dry. The second is the law of the excluded middle, in which either “p” or “not-p” must be true, and no third truth is possible. Using the same wet/dry example, if something is either wet or dry, it cannot be defined in any other way.

As with all definitive laws, experts seem to most enjoy trying to disprove them. One of the earliest Greek philosophers was a misanthropic savant called Heraclitus, often remembered for having tried to cure himself from acute edema by burying himself in cow manure. Heraclitus apparently rejected the law of non-contradiction, with the observation that “the road that goes up and the road that goes down are one and the same”.

Plato would later qualify this rejection as counterintuitive, with his own observation that to the person using the road at any given moment, either it is going up, or it is going down—but it can’t be doing both.

Contemporary philosophers and logicians have invented a term for the antithesis of non-contradiction: dialetheism (dialetheia is a portmanteau word combining the Greek di, or two, with aletheia, which means truth). In the world of dialetheism, self-contradictory propositions can be both true and false, and are referred to as “true contradictions”.

This idea has most famously been used by the modern philosophy guru, Graham Priest, to resolve the ancient “liar’s paradox”, the problem of assessing liars who state that they are lying. Are they lying, in which case they are telling the truth, or are they telling the truth, in which case they are lying? Dialetheism resolves this paradox by asserting that in that particular situation, the law of non-contradiction does not apply—a liar remains a liar, while the statement that they are lying is also true.

In her 2016 book, A Theology of Nonsense, British theologian Josephine Gabelman notes that although this idea undermines the inflexible logical underpinning of atheism, “dialetheism is seldom included in modern theological discourse”. Her observation is correct, and theologians are clearly slow off the mark.

A perfect opportunity for the use of dialetheism can be found at the beginning of Va’eira, in God’s response to Moses after he reacted badly when Pharaoh intensified the workload for the Hebrew slaves as a direct result of his intercession on their behalf, a point picked up by a nineteenth century bible commentator.

Moses was very despondent, in the belief that he was to blame. Moreover, the new draconian impositions on the slaves made no sense at all if he had been sent by God as the redeemer. After all, if it was time for redemption, why were things getting worse? And if the time for redemption had not yet arrived, why had he been asked to lead it?

God enigmatically informs Moses that He revealed himself to the patriarchs as “El Shadai”, rather than as the God of the tetragrammaton, the four-letter name that represents the most elevated version of divine presence. What was He talking about and how did this explain the situation?

Rabbi Naftali Tzvi Yehudah Berlin of Volozhin explains that the “El Shadai” name of God is always used in situations that reflect the ultimate purpose of creation, which is to reveal God’s glory for all to see. If God does anything to increase or enhance our awareness of His existence and greatness, the name that embodies such a moment is “El Shadai”.

Meanwhile, the tetragrammaton projects the concept of God’s immanence, and his utter control of every aspect of creation at any given moment, even though his presence in the physical universe is completely hidden.

The significant problem posed by these two different names of God is that they represent a profound theological contradiction. If God’s glory-revealing interactions with the world are the ultimate purpose of creation, why is God invisible? And if God’s most elevated form is utterly invisible, how do public displays of His presence reveal His glory?

This paradox is only a problem if the law of non-contradiction applies to God, and it was exactly this that confounded the patriarchs. Now, in Egypt, this same paradox had caused Moses to doubt his role.

God therefore told him that although the patriarchs may have found the contradiction challenging, they accepted it for what it was. They understood how it could be explained using dialetheism, which allows for self-contradictory propositions to work in circumstances where no other choice makes sense.

For God, both the importance of revelation and hiddenness can be true at the same time. He can be behind the increased oppression of the slaves, which seems to epitomize His concealment, while simultaneously it can form an intrinsic part of the revelation of God’s glory.

As it turns out, it is entirely possible for something to be a secret and not a secret at the same time. I wonder what Anthony Haden-Guest would make of that.