BLESSINGS FOR A PILLAR 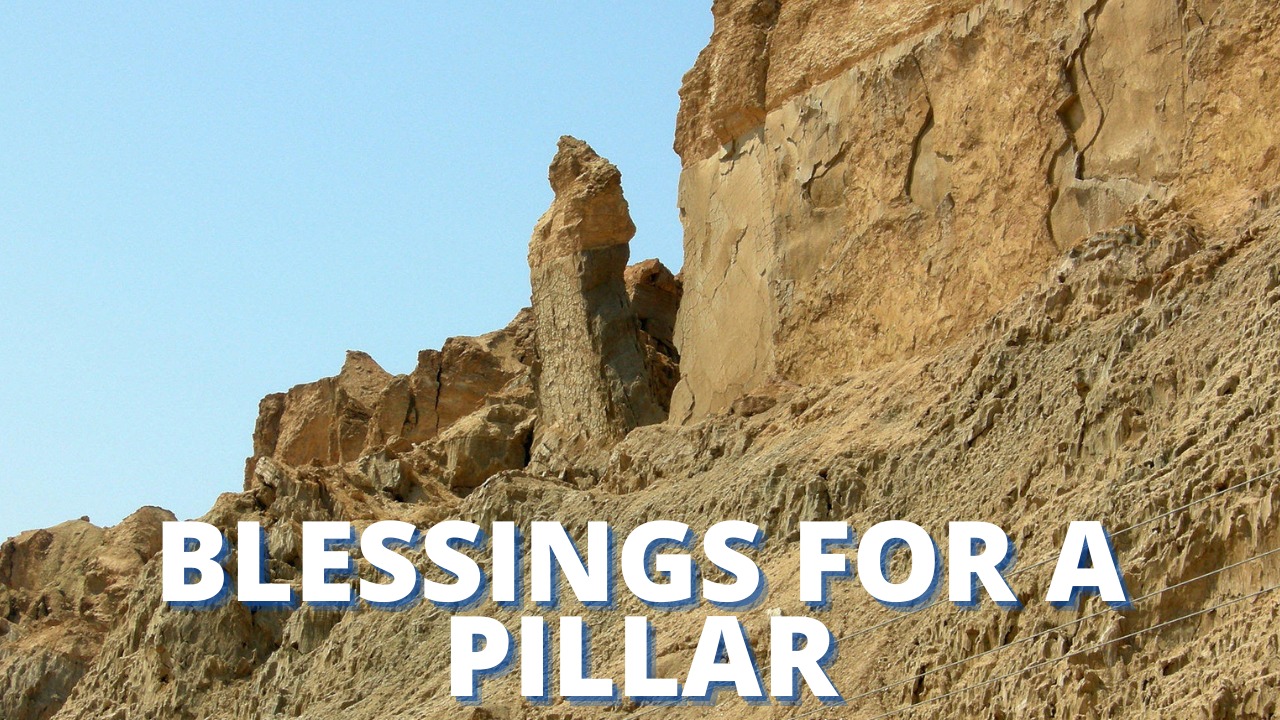 You’ve probably never heard of the Sanctuary of Agios Lot, a Byzantine era monastery that is now a pilgrimage site which consists of church ruins at the entrance to a natural cave on the Jordanian side of the Dead Sea.

The location of the church – which is depicted on the sixth-century Madaba Mosaic Map – was believed by those who constructed it to be where Abraham’s nephew Lot sought shelter after Sodom was destroyed, as recorded in the narrative in Parshat Vayeira. Nearby is a rock formation, promoted by local guides as the pillar of salt that was originally Lot’s wife.

Not to be outdone, tour guides on the Israeli side of the border point to a jutting piece of rock on Mount Sodom – an unprepossessing hill adjacent to the southwestern part of the Dead Sea – which they identify as the true “Lot’s Wife” salt pillar.

And unsurprisingly, there are other pretenders to the throne. In 2017, Times of Israel published an article about Noam Bedein, a photographer and activist who founded the Sderot Media Center in 2007. The article focused on Bedein’s photographic output after he had decided to shift his attention away from the Gaza-rocket destruction in Sderot to focus on the rapidly receding waters of the Dead Sea, and the salt formations this manmade environmental disaster is exposing in real time.

One of the crystallized salt formations photographed by Bedein – as depicted in the article – protrudes 4.5 feet out of the water into the air. Until 15 years ago this “pillar of salt” was entirely submerged underwater. When I saw this photograph, it struck me that the salt column could easily be Lot’s wife, hidden for millennia until her sudden exposure in the twenty-first century. And I am sure there are other salt pillars that have emerged since then, seeing as the Dead Sea is receding by more than three feet every year.

The Torah informs us that before the cities of Sodom and Gomorrah were destroyed, God’s angel emissaries told Lot and his family (Gen. 19:17): הִמָּלֵט עַל נַפְשֶׁךָ אַל תַּבִּיט אַחֲרֶיךָ וְאַל תַּעֲמֹד בְּכָל-הַכִּכָּר הָהָרָה הִמָּלֵט פֶּן תִּסָּפֶה – “Escape for your life; do not look behind you and do not stay on the plain, run for the mountains so that you do not die.”

According to Rashbam, there were three reasons they were told not to look backwards. The first was that they were forbidden from having any mercy for their family who had refused to leave with them; the second was that they shouldn’t slow themselves down; and the third was that they would not see the city being destroyed. But, as the Torah records, Lot’s wife disobeyed the directive and did look back – “and she became a pillar of salt” (Gen. 19:26).

The Shulchan Aruch (Orach Chayim 218:8) – basing itself on a passage in the Talmud (Berachot 54a) – codifies a law regarding the pillar of salt formation which was formerly Lot’s wife: “Upon seeing Lot’s wife you must recite the blessing dayan ha-emet (‘the True Judge’), and in memory of Lot you should say [the blessing of]  zocher tzadikim (‘He remembers the righteous’).”

The question this raises is – why should one include a blessing for Lot in a blessing that is really only to do with his wife?

Rabbi Avraham Yitzchak Kook (1865-1935) offers a compelling explanation (Ein Ayah, Berachot 9:12). The destruction of Sodom was conditioned on the elimination of Sodom’s repellant ideology, a culture that the Midrash informs us was epitomized by Lot’s wife’s mistreatment of the angels who were posing as their guests.

But getting rid of evil means nothing if the vacuum it leaves behind is not filled with good. As my late father used to put it, “there is no such thing as an empty cupboard” in an active home. A busy household can always fill a closet – the question is only whether that empty space will be filled with junk, or with something useful. The opportunity created by Sodom’s exit would amount to nothing if that space would now be occupied by something equally loathsome.

Before God told Abraham He was about to destroy Sodom, He mulled over the idea. Should He go ahead and tell Abraham about Sodom’s destruction? After all, it really had nothing to do with him.

On the other hand, how could God not tell him? Because, as He said, Sodom’s obliteration was not entirely unrelated to Abraham – as it would be Abraham who would fill the gap left by Sodom once it was gone (Gen. 18:19): “I have singled [Abraham] out, so that he may instruct his children and his household going forward to keep the way of God by doing what is just and right.” And it was on that basis that God decided that He would tell Abraham about what He intended to do.

Which is why, when we say the blessing on Lot’s wife, we must also say a blessing to “remember the righteous” – because we must be fully focused on the alternative to the evil that Lot’s wife represents. Purely emphasizing Sodom’s destruction and the elimination of Sodom’s evil will never have any meaning if the goal is not to replace that evil with goodness and righteousness.

All of this means that the only problem that remains is to decide which of the Lot’s wife salt pillars around the Dead Sea we should choose so that we can make our blessings. On that one, I’m afraid, the jury is still out.

Image: “Lot’s Wife” on the side of Mount Sodom on the southwestern shore of the Dead Sea