BERTRAND RUSSELL AND THE TRIANGLE 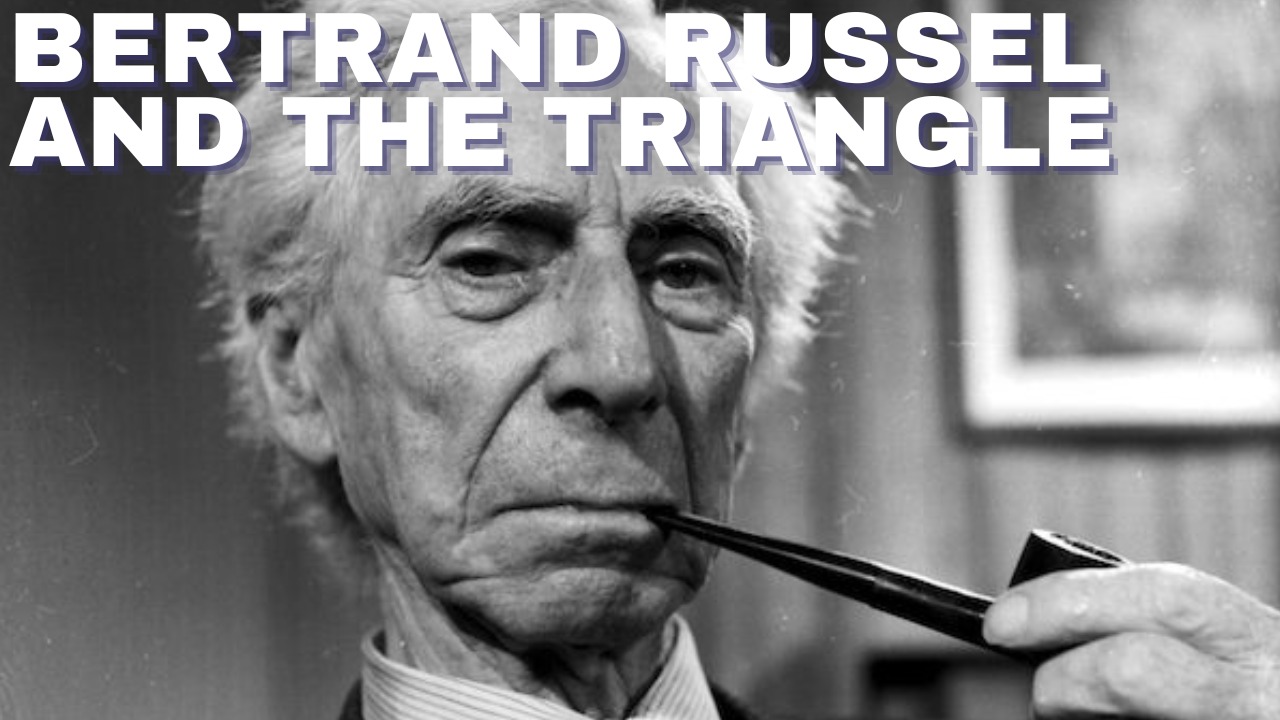 There is a widely-circulated apocryphal story about the British philosopher Bertrand Russell (1872-1970) which purports that while he was the Professor of Ethics at Harvard University, he engaged in an adulterous affair with one of the other professor’s wives.

Harvard’s Board of Overseers called him in to express their disapproval for his gross indiscretion, but Russell protested that his private life had nothing whatsoever to do with them, and in any event, he told them, his teaching was unaffected by the affair.

“But you are Professor of Ethics!” one of the board members exploded, “how can you possibly suggest that your performance as an ethics professor is not affected by your extremely unethical private life?”

“I was a Professor of Geometry at Cambridge,” Russell responded, “but no one ever asked me why I was not a triangle.”

There are several problems with this story, not least of which is that Bertrand Russell was never a professor of ethics at Harvard University, nor was he a professor of geometry at Cambridge. And although he was in residence at Harvard during the spring term of 1914, when he conducted courses in the Logic and Theory of Knowledge, it is highly unlikely that any amorous misdeeds he might have committed during those few months would have resulted in him being hauled up in front of the senior leadership of the college.

The story probably originates with something Russell may have told his students about Aristotle. There’s an anecdote about the Greek philosopher – with equally dubious provenance – that has him going out into the countryside with his students, and becoming overcome with hunger. He promptly catches a rabbit and rips off one of its legs while it’s still alive, and eats the leg raw.

His students are shocked. “How is it that Aristotle, the greatest of all philosophers, can stoop to do something so low?” they ask him. To which he responds, blithely: “When I’m teaching, I’m Aristotle; but when I’m not teaching – I’m just a human being.” And in Russell’s version of the story, Aristotle’s response is simply: “Is a mathematician a triangle?”

Russell was – at best – amoral when it came to his personal behavior. But to be fair, he never hid behind moral grandstanding in a way that might have led others to consider him a hypocrite. On the contrary, he actively advocated for a break from religious faith and for sexual liberation as part of his approach to metaphysics and the human condition, as evidenced in his seminal 1927 lecture “Why I am not a Christian,” his 1929 book “On Marriage and Morals,” and his 1936 essay “Our Sexual Ethics.”

In 1940, Russell was embroiled in a controversy over his appointment as a professor at New York’s City College, after the Episcopal Bishop of New York protested that he was unfit to serve as an educator, and a parent sued the college, claiming that her daughter’s morality would be irreparably damaged by being exposed to Russell. The furor dragged through the courts and Russell was ultimately denied tenure.

I don’t want to be construed as a Bertrand Russell basher, particularly because – despite his progressive leanings – he was an outspoken defender of Israel’s right to exist. “I have come gradually to see,” he said, “that in a dangerous and largely hostile world, it is essential for Jews to have some country which is theirs, some region where they are not suspected aliens, some state which embodies what is distinctive in their culture.”

Sadly, after the 1967 Six-Day War and already well into his 90s, Russell condemned Israel’s “aggression” and advocated an immediate return to pre-1967 borders. But as he once said himself, “the hardest thing to learn in life is which bridge to cross and which to burn,” and he was the first one to admit that he didn’t always get it right.

Nevertheless, Russell said a great many very clever things, and was both sharp and wise in his observations of life and regarding the foibles of humanity.

In which case, irrespective of whether the triangle story is true or not, the question remains: is it appropriate to learn important lessons about how one should behave from someone who is brilliant, but morally flawed?

The definitive Jewish answer can be found in the second paragraph of the Shema prayer, in Parshat Eikev (Deut. 11:18-19), which we recite twice daily:  וְשַׂמְתֶּם אֶת דְּבָרַי אֵלֶּה עַל לְבַבְכֶם … וְלִמַּדְתֶּם אֹתָם אֶת בְּנֵיכֶם – “you should place these matters on your heart… and you should teach them to your children.”

The message of the second verse’s proximity to the first is that it does not appear in a vacuum. On the contrary, the second verse is utterly contingent on the first. The Torah wants us to know that it is imperative for those who give moral instruction and encourage ethical behavior to be paradigms of morality and ethics, as well as exemplars of integrity and moral aspiration.

Equally, it is incumbent on those who choose their teachers and mentors to choose only those who represent the values they impart. To do otherwise is merely to provide yourself with an excuse to give in to human frailty.