BEING GOOD IS IN OUR NATURE 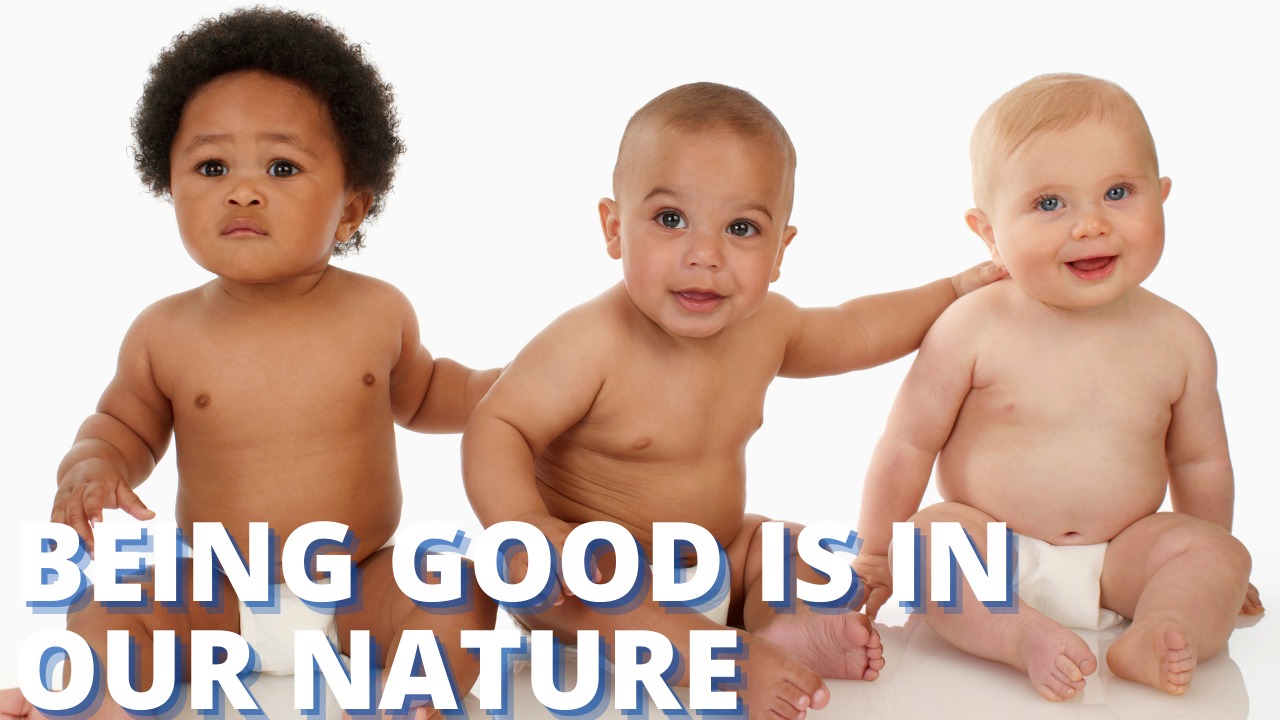 Thomas Hobbes (1588–1679) is a foundational political philosopher of the modern era. Best remembered for his 1651 book Leviathan, he believed that all humans are naturally selfish – even evil – and unless they are ruled by a common master, essentially a totalitarian regime, human existence will inevitably descend into complete anarchy. As he put it, “the condition of man… is a condition of war of everyone against everyone.”

Hobbes’ nemesis was John Locke (1632–1704), the enlightenment philosopher known as the “Father of Liberalism.” He profoundly disagreed with Hobbes’ premise. All human beings are naturally concerned for the welfare of other humans, he said, and they can always tell right from wrong. Locke proposed universal democracy as a system of government, because he believed that humans are collectively good, and by default they want the best for others.

This debate has raged ever since it was first proposed – are humans fundamentally good or are they evil, and what are the repercussions for how we should run our lives? In a 2013 article for the BBC, Dr. Tom Stafford of the University of Sheffield observed that one good way of resolving this debate is to look at baby behavior. “Babies are humans with the absolute minimum of cultural influence – they don’t have many friends, they have never been to school and they haven’t read any books… their minds are as close to innocent as a human mind can get.” With this premise as a foundation, a range of imaginative experiments was carried out by researchers at Yale University and we now know that babies have a real sense of right and wrong, and more importantly – they instinctively prefer good over evil.

What is religion’s view of whether humanity is inherently good or evil? As it turns out, it depends which religion you look at. For Christianity – the view is decidedly Hobbesian. As a result of Adam and Eve disobeying God and eating forbidden fruit in the Garden of Eden, humans are considered permanently damaged by “original sin”, always predisposed to sinful behavior. This idea actually has its roots in paganism, and particularly in the theology of ancient Egypt, where, in the Myth of the Heavenly Cow, humanity is portrayed as imperfect, choosing to rebel against the rule of the sun god. In this reading of the human condition, evil exists because of humanity’s selfishness, and in the story, the sun god has to eliminate the very people he had created in order to rid the world of evil.

Meanwhile, Greek philosophy saw things rather differently, much more akin to Locke. According to Plato, “evil acts are only committed out of ignorance… it is inherently against human nature to be evil.” Judaism seems to have been the forerunner of this idea, with the Torah stating that human beings are created in the image of God (Gen. 1:27) – a statement that underscores humanity’s inherent goodness. In Judaism, humans do not have a wicked nature that is stained by “original sin”, rather we are born neutral, with a binary impulse – good, and bad – with the navigation of these two impulses left up to each individual. But – and this is what is most important – the fact we are all born in God’s image means that if we don’t give in to our animal instincts, which seek self-gratification even if this will result in the calamitous downfall of others, we will be instinctively inclined towards altruism and caring for others.

This dichotomy is beautifully demonstrated in the calculated strategy of Pharaoh vis-à-vis the Jewish people in the Exodus story – a strategy that ultimately misfired because he failed to take into account the in-built goodness of human nature, and particularly the absolute selflessness of Moses. Rabbi Yonason Eybeschutz (1690-1764) poses an obvious question – why didn’t the Egyptians enslave the tribe of Levi? There is no indication that they did this out of any kindness, which means that it must have been motivated by self-interest.

It would appear the Egyptians were aware that the liberator of the Jews was destined to emerge from the tribe of Levi, specifically because this was the tribe that was most connected with the legacy of the forefathers and foremothers, evident in their observance of pre-Sinai faith practices. Pharaoh’s miscalculation was simple; he assumed human nature to be intrinsically selfish, and therefore, if Egypt wouldn’t oppress the Levites, they would not have any direct experience of slavery and persecution, and wouldn’t feel the need or have any interest in leaving Egypt. They would certainly have no interest in producing a charismatic liberator who would lead the nation out of slavery.

But Pharaoh’s breezy assumption was nothing but an ill-informed gaffe. What he failed to consider was the fact that human beings are not innately evil and selfish. On the contrary, that kind of nature is an aberration, a deviation from the norm. The tribe of Levi, far from remaining aloof from the plight of their brethren, was filled with empathy for them, determined to do whatever they could to alleviate their dreadful situation. And as for Moses, he felt the pain of every Jew as it if was his own, to the point that he even remonstrated with God (Gen. 5:22): לָמָה הֲרֵעֹתָה לָעָם הַזֶּה – “Why did you harm this people?” Even in the face of certain failure, time after time, Moses was willing to return to Pharaoh and push the envelope for the salvation of his people.

The powerful lesson of Moses’ leadership is that human nature transcends selfishness. We all have the capacity to put ourselves at risk, as well as to expose ourselves to loss, danger, difficulty and discomfort, just so that another human being will have what they need, not be in danger, not have to undergo difficulty, and not be forced to experience discomfort. And although it may occasionally be a bit of a struggle, we are all born in the image of God – and being good is our absolute destiny.