BACKS TO THE WALL 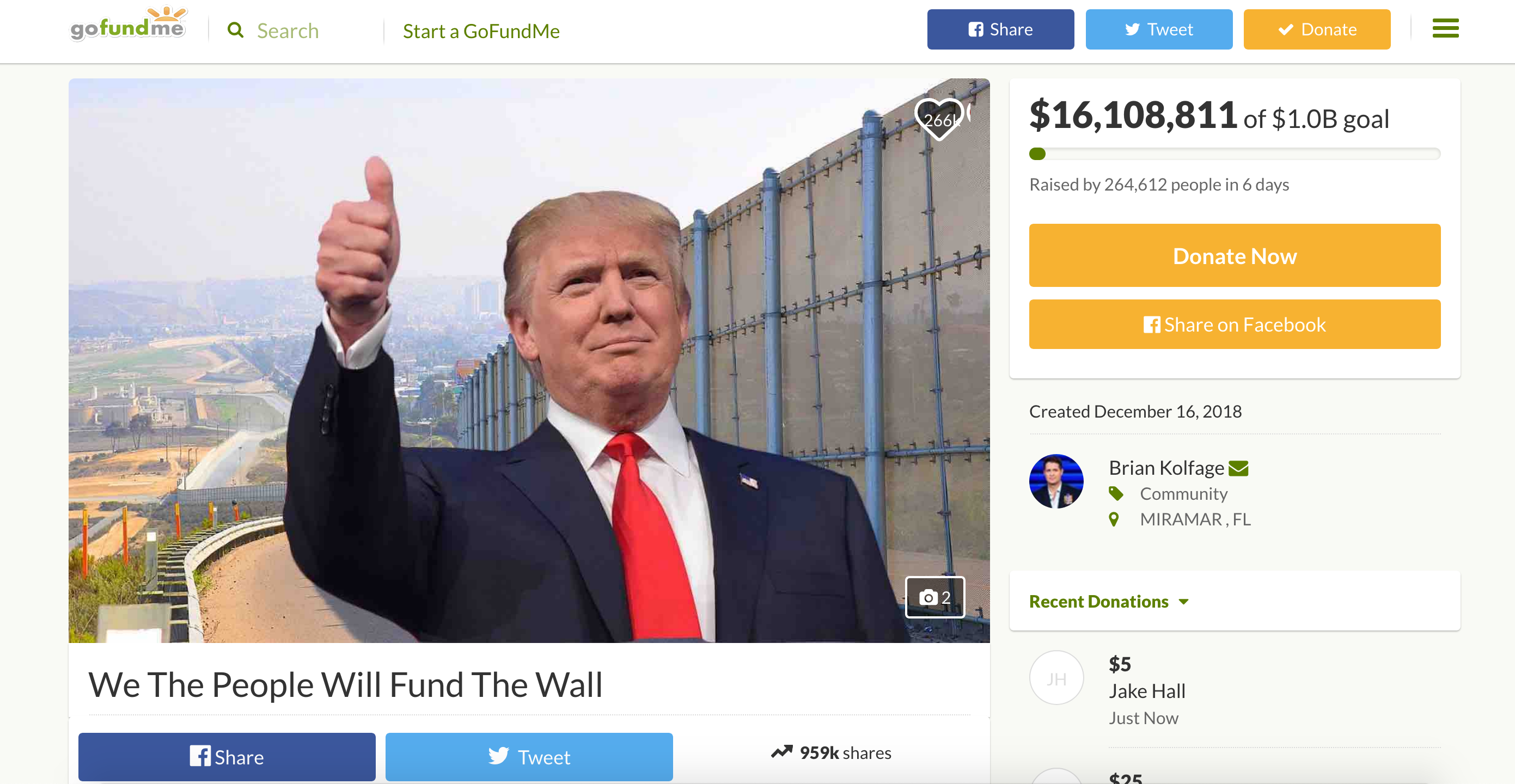 As the row over President Trump’s border wall gathers pace, with thousands of Central Americans camped in Tijuana on the Mexican-American border, and the president holed up in the White House over the holidays in the midst of a government shutdown, the media has gone into an absolute frenzy.

From the moment Trump declared his candidacy in June 2015, he made building a wall spanning the entire southern border of the United States a central promise of his presidential campaign. At the end of his candidacy announcement speech, he pledged to “build a great, great wall on our southern border,” adding that he would get Mexico pay for it.

Of course Mexico had no intention of paying for a $22 billion border wall, and neither did Congress. Which has meant that the border wall has so far remained nothing more than a meaningless electioneering mantra.

But with problems mounting for the beleaguered president, and his support base refusing to accept any capitulation on this issue, Trump is digging in his heels, refusing to approve the government budget until it includes a $5.7 billion spending bill to fund the wall.

The face-off has resulted in a partial government shutdown, affecting hundreds of thousands of workers across nine federal agencies, and although a range of compromises have been discussed, so far they have all been summarily rejected by the president. And as we head towards a Democratic majority in the House of Representatives, it would appear that hopes for a “great, great wall on our southern border” are fading fast.

What strikes me most about this entire issue is that the conversation is all about the wall, and on the rights and wrongs of building a border-spanning barrier between the United States and Mexico. The benefits or otherwise of immigrants coming to the United States – a subject that is in desperate need of an honest national debate – has receded into the background, or disappeared completely, as politicians and pundits clamber over themselves to vilify the president’s intransigence, or alternatively to hail his heroic stand.

What have we become if we allow ourselves to forget that this controversy is not simply about a wall? It is actually about people. And I am not just referring to the illegal immigrants already here, nor to those making the effort to get into the country. It is not solely about them, because ultimately it is also about us.

All of us are affected by this issue. Not merely in terms of the economic benefits to us of dynamic legal immigration weighed up against the negative impact of unfettered illegal immigration – truthfully, that is something all of us non-economists will probably never properly understand.

No. What I am referring to is how this issue affects us in terms of who we have become as people when immigration has evolved into nothing more than a political football, a talking point, an ideological badge.

The book of Shemot opens with a fly-on-the-wall report of a conversation between Pharaoh and his courtiers regarding the dangers of the growing Israelite community in Egypt. Concerned by the ludicrous suggestion that the Israelites were a fifth column, and would align themselves with Egypt’s enemies in the event of a regional war and pose a security danger to Egypt, Pharaoh and his advisors proposed a draconian course of action to ensure that this outcome would never materialize.

When reading Haggada at the Passover seder, we recall this moment by introducing it with a verse from the book of Devarim (Deut. 26:6) – Moses tells the nation: וַיָרֵעוּ אֹתָנוּ הַמִצְרִים – ‘the Egyptians dealt with us in a malevolent manner.’

I have always found it puzzling that Pharaoh’s closed-door strategizing is presented to us as his most malicious act against the Israelite minority in Egypt. After all, he went on to enslave them and wantonly mistreat them, and he also perpetrated mass genocide against their male babies. Surely this was far worse? In any event, why would we fault Pharaoh for being concerned about his nation’s security?

The real issue with Pharaoh’s solution was not the solution; rather it was his misidentification of the problem. There was never a threat from the Israelites living in Egypt, as they were never going to undermine his kingdom.

But once Pharaoh and those around him had decided that the threat did exist, this “threat” became the source of everything that unfolded subsequently. Had the Israelites truly been enemies of Egypt, the campaign to neutralize might have been justified. But they were not enemies, and mislabeling them as such was Pharaoh’s greatest act of malice.

Ironically, the Achilles heel of any public policy is very often the problem it is trying to solve. Once the problem is identified, any discussion will revolve around the relative merits of possible solutions.

But what if the problem being addressed is not really the problem at all? It follows that any debate over potential solutions is by definition misguided. After all, even when one is certain about a problem, finding the right solution can be a challenge.

The debate over the proposed border wall and how it should be paid for concerns a controversial solution to the wrong problem.

The United States is a country noted for its economic opportunities, understandably attractive to economic migrants. A recent Pew Study reported more than ten million illegal immigrants already resident in the United States, with almost eight million of them in the workforce, and two thirds of them who have lived here for more than ten years.

It is not the immigrants who are the problem, rather it is the lack of a workable and coherent immigration policy. The time has come for politicians to stop fuming over a wall that is nothing more than a distraction, and which will never solve the real problem, and instead they should start looking for solutions that will.

Photo: GoFundMe page set up by Brian Kolfage, a triple amputee Air Force veteran and motivational speaker, asking the 63 million Americans who voted for President Trump to chip in $80 apiece for the border wall (Screenshot)