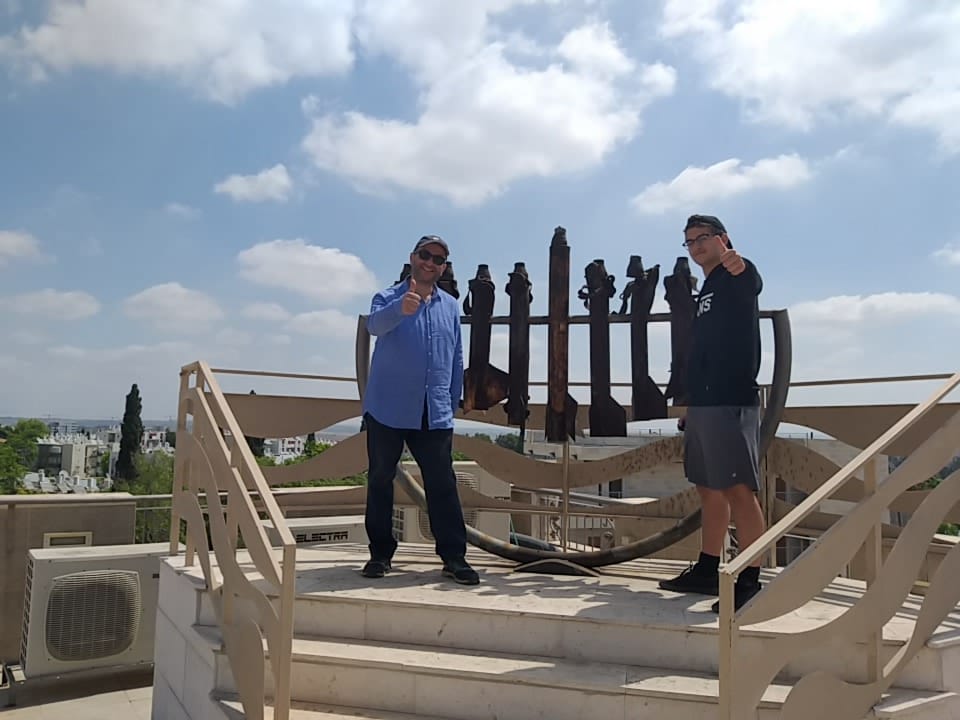 I have just returned from a three-week trip to Israel. I was there to accompany our son Meir as he begins his incredible voyage as a soldier in the IDF. One very important thing I learnt during my visit is that although Meir will nominally be referred to as a chayal boded – “Lone Soldier” – the last thing he will be in Israel is ‘alone’.

The outpouring of support and invitations for Shabbat that Meir received far exceeds the amount of Shabbatot he will be available during the course of his army service. Nevertheless, it is so incredibly heartwarming to know that while he may be 7,000-miles away from home, he has so many ‘homes’ in Israel in which he will feel welcome and loved.

There is a verse in Divrei Hayamim that expresses it so beautifully (1 Chron. 17:21). The verse is usually translated “who is like Your people Israel, a unique nation on earth.” But an alternative interpretation is this: “who is like Your people Israel, a nation that is one in the land” – namely, the Jewish people is like one big family, all pulling in the same direction and for the same cause. While we were in Israel, we truly felt it.

Truthfully, while I may have physically been in Israel for three weeks, the first two were spent in mandated quarantine, and we were therefore completely isolated from everyone and everything.

Without any doubt it was one of the weirdest experiences of my life. Although we could hear and see the world going on all around us – the hustle and bustle of central Jerusalem was yards away, just outside our windows – we had no choice but to stay indoors. We were not allowed to see anyone in person, and our only contact with people was via phone and Zoom.

As you can imagine, when we finally emerged from “bidud” last Monday morning, we were raring to go, and – off we went. My delightful cousin Shayke – who, after working for decades as a financial comptroller and public servant has decided to devote his post-retirement to being a professional tour guide – picked us up at 7am.

Our first stop was Sderot, a town just north of the Gaza strip. Over the past several years Sderot has been subjected to thousands of hostile missile attacks from Gaza, but it is nonetheless thriving and – remarkably! – growing. New neighborhoods are springing up, and the mood is upbeat and optimistic.

We visited the local Hesder yeshiva, headed by Rabbi Dovid Fendel, an indomitable and spirited man who bounded up the stairs to the roof to show us a full panoramic view of Sderot – as well as nearby Gaza, which is just a few hundred yards away.

The yeshiva’s rooftop menorah is ingeniously constructed from the spent shells of mortar rockets dispatched by Gaza terrorists to kill Sderot residents, a powerful symbol of Israel’s resilience in the face of its enemies.

Before leaving Sderot we popped in to see the local fire truck, which our synagogue in Beverly Hills sponsored some years ago. The fire truck took a direct hit during the 2014 Gaza War, and our community then paid for the repairs.

When we arrived at the fire station we were glad to see that the truck was being put to good use at a training session nearby; we waited a few minutes until it returned so that we could pose for a photo to show the folks at home.

We then stopped briefly to see the ancient floor mosaic at Maon Synagogue, a sixth-century synagogue first discovered in 1957 and then renovated in 2006.

From there we proceeded to Sde Boker, to visit the retirement home and final resting place of Israel’s first prime minister, David Ben Gurion. Along the way we saw countless orchards; Ben Gurion’s dream of making the Negev desert bloom has become a reality. Apparently, almost all the orchards in central Israel have now been relocated to the Negev to make way for the housing boom that has engulfed their original location.

I had prepared for my visit to Sde Boker by reading Tom Segev’s 800-page biography of Ben Gurion while in quarantine. By the time I walked into his old-world study that is lined floor-to-ceiling with books, I felt like I was walking into the inner sanctum of an old acquaintance.

It was worth the long drive; I could literally feel his presence in that frugal home with its basic amenities and tiny living space.

Ben Gurion was a remarkable man, despite all his many flaws and mistakes. He doggedly pursued the goal of a Jewish state in the Land of Israel through thick and thin, facing up to every challenge with a resoluteness and guile that was rare then, and is even rarer today.

It is hard to accurately pin down what motivated him to do it – he was never religious, and his understanding of Jewish identity was instinctive rather than intellectually rooted – and yet he spearheaded the foundation of the multifaceted and thriving Israel of today, which, as we all know, is a modern miracle. Even Ben Gurion had to admit as much, quipping: “In Israel, in order to be a realist, you must believe in miracles.”

From Sde Boker we drove to the astonishing desert ridge at Mitzpe Ramon – touted as the “world’s largest erosion crater” – and it is certainly a sight to behold.

We stopped at Yeruham, a town that is bang in the middle of the Negev. The local council has turned an adjacent area into a beautiful park, an oasis with an array of foliage and trees, as well as a large manmade lake, created so that residents can benefit from the lush greenery – even though they have chosen to reside in a desert.

Our final stop of the day, before heading to Petach Tikva for the night, was for dinner with friends in Meitar, a lovely town on the southern edge of Mount Hebron, just north of Beersheba.

It was an exhausting but satisfying day. After being cooped up for two weeks, we wanted to experience Israel to the full, and we did. Over the next few days we continued in the same vein. In between organizing various aspects of Meir’s army initiation, we spent time with a range of different people, in a range of different locations, until I dropped him off in Tiberias at 8am on Sunday morning.

And as we drove along the shore of the Sea of Galilee in Tiberias on Sunday, taking in the stunning contrast between the shimmering blue water and the volcanic black rock buildings rising up into the hills, I thought to myself – what a fabulous country, how lucky we are to be the nation that was chosen to inhabit it.

Ramban introduces his commentary to Devarim as follows: “This book is known as Mishneh Torah (A Review of the Torah). In it, Moses explains to the generation that will enter the Land of Israel all of the commandments they will need to know.”

Intriguingly, many of the mitzvot in Devarim are already mentioned in the first four books of the Torah. So why is a review necessary?

Elsewhere, Ramban points out that the primary duties of Judaism require a Jew to be in Israel. Even if one performs mitzvot diligently outside Israel, it is never the same as doing them in Eretz Yisrael. That is because the Land of Israel is the beating heart of the Jewish people, and in the country of our heritage mitzvot and Jewish identity take on a whole new dimension.

The Torah was given at Mount Sinai to a nation of Jews who lived in the diaspora. Their observance of the Torah’s commandments may have been perfect, but it lacked one crucial ingredient: Israel. For this reason Moses needed to add another layer of instruction immediately before the nation entered the Promised Land, so that they would realize how extraordinary this move was going to be. It was not simply a change of geographical location; it was a move into a whole new level of being Jewish.

The sights, the sounds, even the air and water of Israel, cut to the core of who we are as Jews, and only by being there can we truly appreciate that, and fulfil our ultimate destiny as God’s Chosen People.