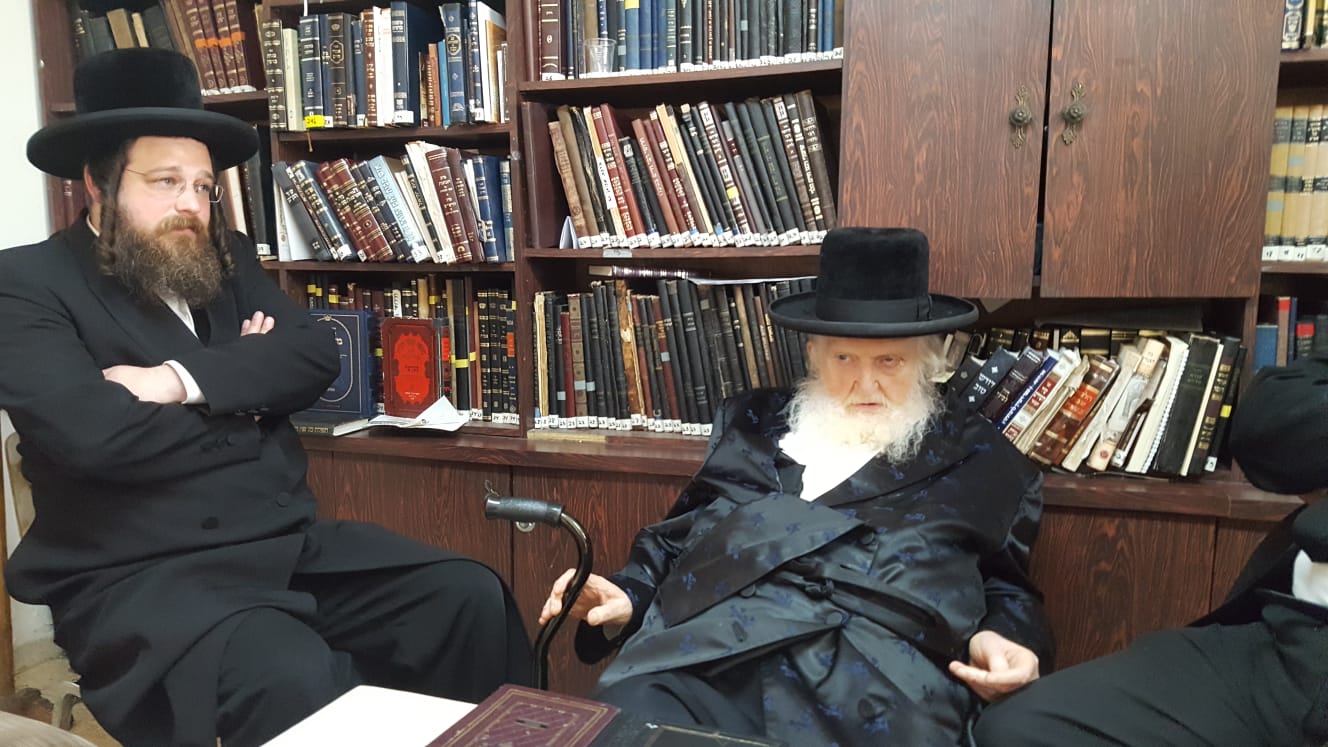 Rabbi Moshe Sternbuch (b.1928), originally from London, is the Ra’avad (Chief Rabbi) of the Edah HaChareidis anti-Zionist community in Jerusalem. A descendant of the Vilna Gaon, he lives in the Har Nof neighborhood of Jerusalem, where he is the rabbi of the GR”A Synagogue, named after his illustrious ancestor. He is well known to be extremely conservative and stringent in his application of halacha (Jewish law), often erring on the side of stricter halachic rulings rather than being lenient.

Rabbi Ahron Meir Meisels (pictured above with Rav Sternbuch in 2017) is the editor of a widely-read and respected rabbinic journal, “Etz Chaim”, and a close confidant of Rabbi Mordechai Dovid Ungar, Admo”r of Bobov-45 in New York. Rabbi Meisels is the son of Rabbi Shloime Meisels, Rav of the Chevra Shas shul in Tottenham, London.

This past Shabbat, as Rabbi Meisels describes in his letter to Rabbi Sternbuch, Rabbi Meisels’ street block in Boro Park, Brooklyn, became an ad-hoc shul, as residents stood on their balconies and held an impromptu minyan.

Prayers included Kriat HaTorah (public reading of the Torah), and although only Rabbi Meisels and his son were standing next to the Torah as he read aloud from it for everyone on the block to hear, he nonetheless “called up” the olim, and they made their berachot (blessings) “over the Torah” remotely, standing on their balconies quite some distance from the Torah scroll.

After Shabbat, Rabbi Meisels penned this letter to Rabbi Sternbuch, asking for an urgent response, to see if he had acted correctly according to the halacha, and whether or not the street block should continue with this practice going forward until the quarantine period is over, and gatherings of many people in one place are once again declared safe.

Rabbi Meisels has given his permission for the publication of this article. My thanks to him, and to Shlomo Zuckier and Michael Bernstein for their invaluable help. May God grant us a speedy and miraculous end to this dreadful epidemic, which is devastating so many lives, and upending everything that we are used to and rely upon to function as individuals, as families, and as a community.

To His Honor, Prince of the Torah, the great scholar, Rabbi Moshe Sternbuch, shlit”a, Raavad of the holy city Jerusalem,

After my sincerest greetings,

In these topsy-turvy times, may G-d protect us, with Klal Yisrael in need of great mercy, both in the opinion of those tasked with public health in our country, and according to the rabbis, nobody should be gathering together to make minyanim in houses due to the danger this poses, G-d save us. We are lucky enough to live in a building which has a Beit Midrash downstairs, a private Beit Midrash that belongs to Rabbi Chanoch Henoch Teitelbaum shlit”a of Királyháza.

[This past Shabbat] we were fortunate that all the people living on the street could pray on their balconies, as a congregation, together, with great vigor, throughout the Shabbes day. I actually led the prayers and the Torah reading from the balcony of our residence. Everyone could see [me,] the person leading prayers (shaliach tzibbur), and for the most part, everyone could see everyone else.

We were meikil (lenient) as follows: we brought the Torah scroll up from the Beit Midrash room to our balcony to read from it — since after all, this is only moving around within a single building, and also for reasons of Kevod haTzibbur (the honor of the congregation), and the honor of an Adam Chashuv (important person) in distress, [namely, Rabbi Teitelbaum himself].

However, because the building is inacessible, with nobody allowed to enter due to the weakness and present vulnerability of the rabbi shlit”a, we read from the Torah scroll from [where I was standing], and called up the seven olim to have their aliya and recite their Torah blessings from where they were standing elsewhere, and relied on shome’ah ke’oneh [fulfilling a recitation obligation by proxy, by hearing someone else do it] via the Torah reader’s [namely, my] leining (reading).

But we now find ourselves asking the question: is it proper to continue to act in this fashion during this period of crisis? [Should we] see it as no less valid than the case of a blind person, for whom it is possible to read for them even though they cannot themselves see the text? Or should we cease doing this from now on, since the Shulchan Aruch rules that the reader, [and this was the original fundamental role of each oleh, before we established the concept of one person, the Baal Koreh, reading it for everyone,] must hold onto [the handles or case of] the Torah scroll?

It is also worth noting that among some of these olim, there are elderly people who have not gone outside their homes for almost an entire week, and their sorrow and anguish is incalculable – and it is literally like a life-giving dew to them, namely this opportunity to participate in the reading of the Torah by being oleh to the Torah.

Looking forward to the salvation of God, for all the Congregation of Israel,

This is Rabbi Moshe Sternbuch’s response augmented and explained (for his exact words, see image below):