A LESSON FROM GENERAL SHERMAN 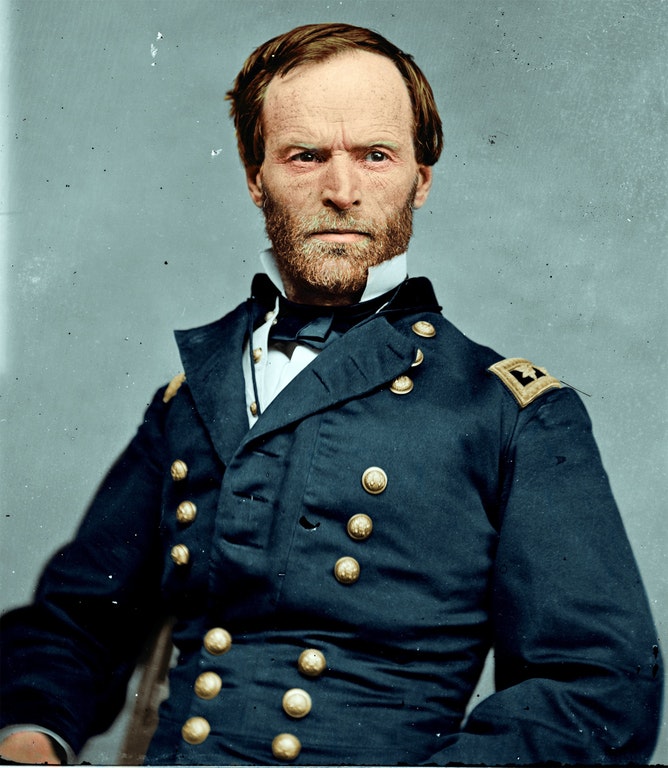 One of the most celebrated heroes of American military history is General William Tecumseh Sherman (1820-1891).

Sherman was a Civil War general who served under Ulysses S. Grant, and whose ‘March to the Sea’ in 1864 is widely credited as having been the main contributing factor that won the war against the South, and saved the Union. This famous operation, enthusiastically supported by both Grant and President Lincoln, was based on the concept of ‘total warfare’, a military strategy that does not differentiate between combatants and non-combatants, or between military and non-military infrastructure or supplies, on the basis that any resource, human or otherwise, that contributes to the enemy’s ability to survive and continue fighting, must be eliminated in order for the war to be won.

Sherman’s ‘march’ saw the wanton destruction of property, and the death of civilians, first in Georgia, from Atlanta to Savannah, and then in both Carolinas, where the damage and devastation was even worse. The objective was to bring the confederacy to its knees economically, so that the civilian population would demand an end to the Civil War, just so that their lives could return to normal.

Crucially, the campaign did not deliberately target civilians, nor was it Sherman’s intention that civilians would die, but nonetheless it was inevitable that many did. No one accused Sherman of war crimes then, and to this day he is feted as the military commander whose genius guaranteed the end of hostilities.

There are numerous similar examples of wars being won in this way. I brought this example merely because it is an ironic and evocative example both with reference to Gaza, and with reference to the other current hotspots in the Middle East and beyond. It demonstrates that unless there is a resolve to act against our enemies in a way that will ensure an end to the threat they pose, not only will that threat continue to exist, it will grow and become an ever greater threat as time goes on. And it demonstrates that the modern world’s beacon of democracy and freedom engaged in this very strategy – without equivocation – in order to become that beacon.

The problem nowadays is that we are by ideology and by nature indisposed to waging all-out war. Modern democracies shy away from devastating violence, and always look for solutions that will avoid it. If citizens of the western world witness wanton destruction in a war involving their country, or other western countries, their instinct is to criticize it and to deplore it.

And with constant and immediate exposure to gory media depictions of dead and wounded civilians, and with the risk for political and military leaders of being arrested for war crimes, the armies of democratic nations seem unable to win wars.

We live in an era when it seems that the more powerful you are militarily, and the more advanced you are in terms of your democratic values and system, the less likely you are to be able to win a war against those who are weaker than you in every respect. If this principle had been at play in 1864, when the South was pro-slavery, and was militarily far weaker than the Union, the outcome of the Civil War might have been entirely different. Clearly that would have been unacceptable then, and it is similarly unacceptable now.

It is time for every country that values freedom and democracy, that cherishes the rule of law, to declare ‘enough is enough’. People who seek the destruction of our system, a system that has given us the freedom we all enjoy, whether such people live among us or beyond our borders, must be subjected to the full force of our might, so that their attempts to undermine that which we have fought to achieve will fail.

הַכֵּה תַכֶּה אֶת יֹשְבֵי הָעִיר הַהִוא לְפִי חָרֶב ‘you shall surely smite the inhabitants of that city with the sword, destroying it utterly, and everything inside it, including the cattle….so that God will protect you from His anger and show you mercy.’

The Chafetz Chaim, as R. Kagan was known, is puzzled as to why those who destroy a wicked city would need God’s mercy. Surely they had carried out God’s will?

The Chafetz Chaim’s brilliant insight is this: the greatest fear of those with a merciful disposition when going to war is that they will be adversely affected by their cruelty during wartime, notwithstanding it being a cruelty of necessity. God assures us that we will be protected from any negative repercussions. If you fight a war to uphold your value system – rather than it destroying your morality, the war will strengthen it.

Let me give the last word to William Tecumseh Sherman:

‘War is cruelty, and you cannot refine it, and those who brought war into our country deserve all the curses. I know I had no hand in making this war, and I know I will make more sacrifices today than any of you to secure peace. [Nevertheless, our country] does and must assert its authority, wherever it once had power; for, if it relaxes one bit to pressure, it is gone.’

This incredible statement was true in 1864, and it is no less true 150 years later.