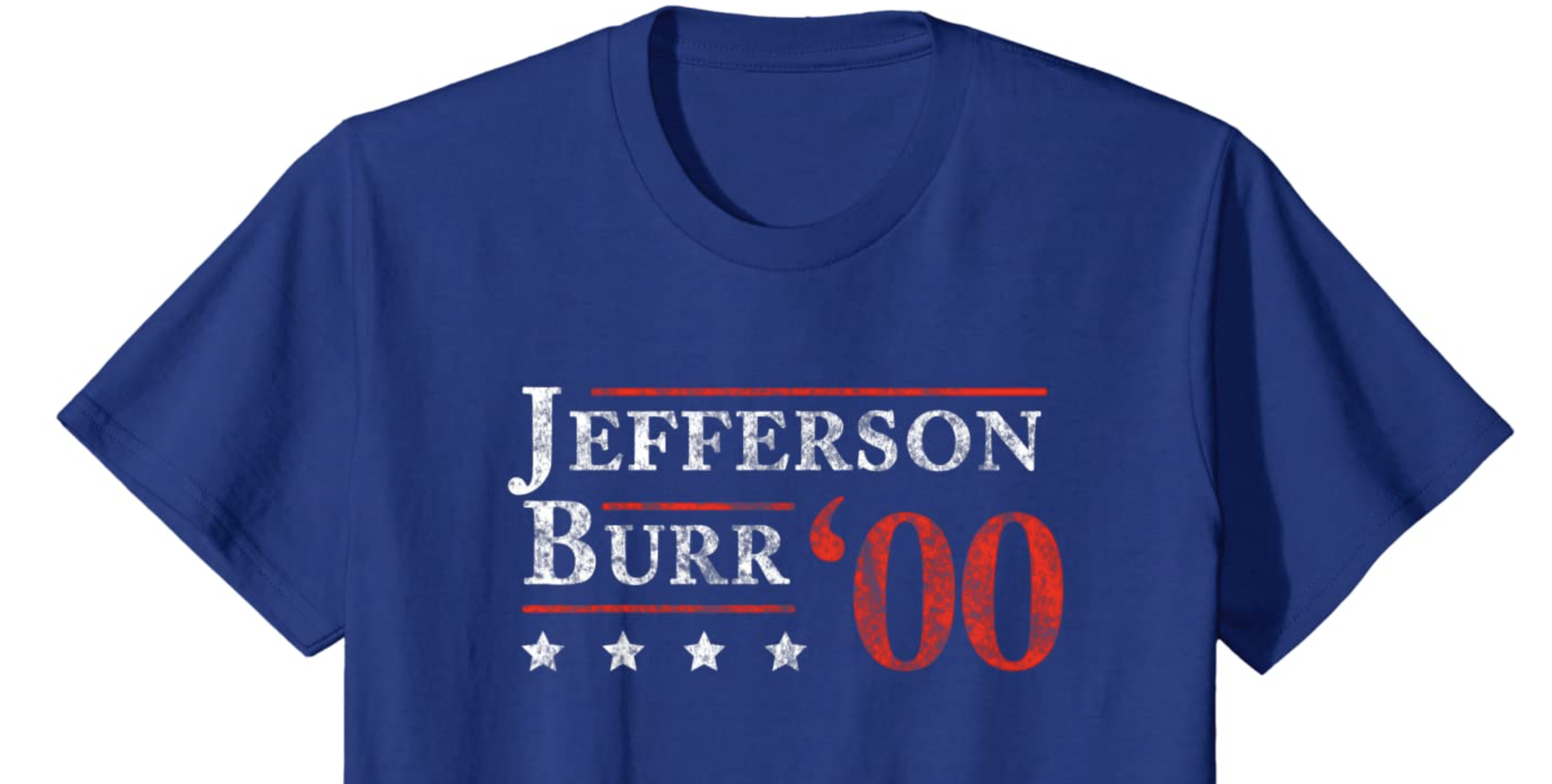 It was a horribly bitter election, with many pundits saying that the rampant rancor and acrimony endangered the future of American democracy. According to one of the candidates, the nation’s newspapers teemed “with every falsehood they can invent for defamation.”

Most alarming of all, the election ended on a knife edge, with neither presidential candidate able to claim outright victory.

No, not 2020, but 1800. The candidates were Thomas Jefferson (the one who commented on media defamation) and the incumbent president, John Adams. Although – as a result of electoral practices abolished soon afterward – the final showdown was actually between Jefferson and his own vice-presidential candidate, Aaron Burr.

The country was divided between Federalists, who favored a patriarchal highly centralized government system; and Democratic-Republicans, who were eager to reduce federal authority so that the people could have more of a say in how they were governed via state-elected lawmakers.

Both sides campaigned on a platform of fear, suggesting that if their opponents won, it would spell the end of the United States. The Philadelphia Aurora, sympathetic to Jefferson, warned that a Federalist win would mean a “reign of terror created by false alarms, to promote domestic feud and foreign war,” while victory for Democratic-Republican Jefferson would ensure “the nation at peace with the world and united in itself.”

Meanwhile, the Gazette of the United States warned that Jefferson was a godless troublemaker, while former Secretary of State, Federalist Alexander Hamilton let it be known that Jefferson was a “contemptible hypocrite” as were all his colleagues – “are we to learn the principles of liberty from the slave-holders of Virginia?” he asked.

Not that Hamilton liked Adams either. In his October 1800 pamphlet, “Letter from Alexander Hamilton, Concerning the Public Conduct and Character of John Adams,” he called Adams “eccentric, propitious neither to the regular display of sound judgment, nor to steady perseverance in a systematic plan of conduct… and to this defect are added the unfortunate foibles of a vanity without bounds, and a jealousy capable of discoloring every object.” Hamilton, ever the Machiavellian political operator, had another presidential candidate he was pushing, but as it turned out it was Hamilton who was crucial to the outcome of the election.

When the results were tabulated it was a sweeping victory for the Democratic-Republicans, who took both houses of Congress in a landslide. The presidential race was somewhat closer, and most intriguingly of all, it saw an electoral tie between Jefferson and Burr. This was because votes for President and Vice President were not listed on separate ballots, and although Adams was Jefferson’s main opponent, Jefferson and Burr came in as joint winners with a tie.

As a result of this curious anomaly, the election had to be decided by the House of Representatives – using the equally divided representatives of the outgoing congress. Each of the 16 states wielded a single vote, and a majority of the Federalists preferred Burr to their hated nemesis Jefferson. The uncertainty persisted for months, and a congressional deadlock in numerous ballots over seven days in February 1801 saw American democracy descending into farce.

Eventually, Hamilton – who saw Jefferson as the lesser of two evils – recommended that his Federalist friends support Jefferson rather than Burr. His intervention was critical, and on February 17th, at the 36th ballot, Jefferson was finally elected President of the United States. Burr never forgave Hamilton for his role in securing the presidency for Jefferson, and their relationship continued to deteriorate until the fateful dual in 1804 that resulted in Hamilton’s death.

Although Jefferson always referred to the 1800 election as “America’s Second Revolution,” he was very taken by the fact that such a contentious transfer of power took place without bloodshed or a complete collapse of the system – the first time ever in human history, he would say.

If anything, the US democratic system had proved that it was robust enough to withstand the toughest stress-test, which only demonstrated how decades of dedicated devotion to democratic principles, day by day, month by month, year after year, had yielded the intended result – a country able to endure dreadful political volatility, and remain the great country it was.

Jefferson’s humility and unexcitable nature undoubtedly contributed to this phenomenon. He arrived at his inauguration on March 4th 1801 on horseback, without an aide, and stabled his own horse. His greatest wisdom, though, was to understand that even as change is in the air there must always be certainties, consistencies, and unchanging realities – so that a revolution seems more like evolution, and our lives remain on an even keel.

In actual fact, the first bloodless revolution in human history did not take place in 1800, as Jefferson claimed, but rather several thousand years earlier, under the direction of an extraordinary individual called Abraham. This pivotal figure realized the fallacy of paganism and became the first self-generated monotheist for humanity.

The Midrash informs us that Abraham’s life was threatened as a result of his belief in an omnipotent Creator-God, but he was resolute and never wavered. When he arrived in Canaan, not only was he accompanied by his immediate family, but by the “souls he had made in Haran” (Gen. 12:5), a group of admirers who had joined his peaceful revolution that aspired to moral monotheism.

What was Abraham’s secret? His revolution is without any doubt the most successful in all of history. From this one individual sprang all the Abrahamic faiths that reject the notion of corporeal gods controlling destiny. But how did he do it?

The Talmud (Berachot 6b) asks a curious question that can help us understand Abraham’s success: how do we know that Abraham set himself a fixed place for prayer?

The answer given is based on a verse in Vayeira: וַיַשְכֵּם אַבְרָהָם בַבֹּקֶר אֶל הַמָקוֹם אֲשֶר עָמַד שָם אֶת פְּנֵי ה  – “The next morning, Abraham hurried back to the place where he had stood before God.” The commentaries puzzle over this concept. What does it mean to have a fixed place for prayer? What is the verse teaching us?

The clue to what the Talmud means emerges from where this verse is located. The previous day Abraham had prayed for Sodom and Gomorrah not to be destroyed – but his prayers had been in vain. Those cities and the entire surrounding region had been utterly devastated.

Abraham might justifiably have felt rejected, disappointed, angry, or any of the many emotions felt by someone whose heartfelt desire has not come to pass. But the following morning he arose and went right back to the task at hand; he understood that the revolution had to continue, and that a bad day would be followed by a good day.

Because as far as Abraham was concerned, the revolution was not measured or overturned by a hurdle or two along the way, but by the long-term success of the overall project, success that would only be guaranteed by remaining calmly focused on the bigger picture.

As the United States of America faces its biggest political challenge perhaps since 1800, whatever side of the political fence you may be on, make sure to hurry back to the place you’ve always stood, and to keep the broader picture in mind.

Or, as Jefferson put it in his inaugural address, “Let us… unite with one heart and one mind [and] let us restore to social intercourse that harmony and affection without which liberty, and even life itself, are but dreary things.”