A ‘EUREKA!’ MOMENT FOR ALL OF US 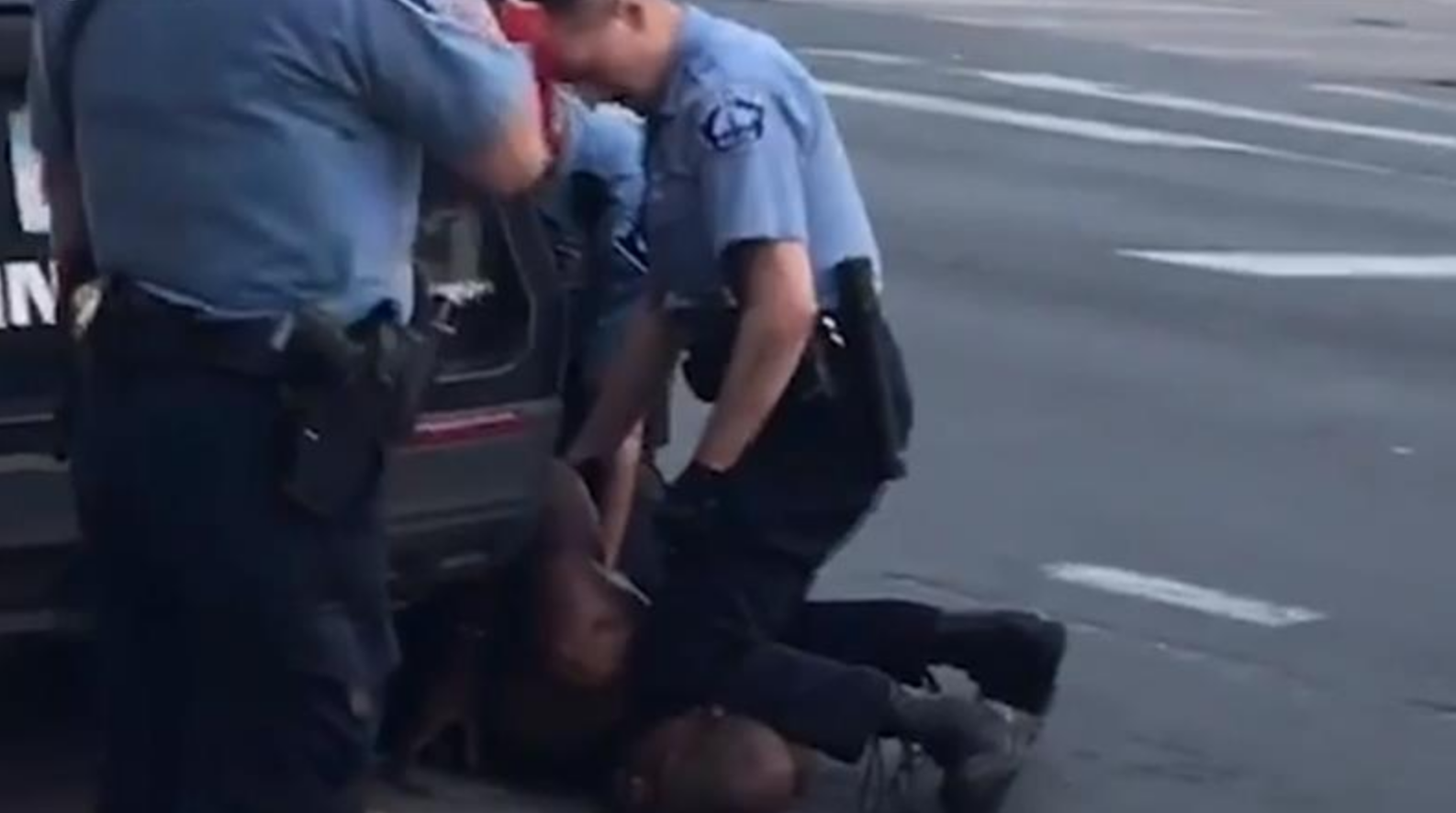 Aficionados of Talmud study will know that it is often one key concept or thesis that will unlock a dense discussion of complex or obscure Talmudic material. In yeshiva we called it the “nekudah” – ‘central point’ – in other words, the one piece of information which can result in the “Eureka!” moment you’ve been looking for.

Over the past ten days I have been looking for a “nekudah”, trying to figure out why it was specifically the death of George Floyd in Minneapolis that unleashed such an outpouring of reaction across the United States. After all, it was hardly the first brutal unnecessary killing of an African American by police or racist vigilantes, nor was it even a particularly jarring example of the kind of raw racism that simmers beneath the surface among some elements of society.

Just over the past couple of months – before any of us had ever heard the name George Floyd – there have been two high profile cases: the fatal shooting of Ahmuad Arbery, a 25-year-old unarmed African American jogger shot and killed by two vigilantes in Georgia who thought he was a burglar; and the bizarre story of Amy Cooper, a white woman who called 911 to report an African American man, Christian Cooper, who had asked her to leash her dog in Central Park, New York, mendaciously telling dispatchers that he was threatening her life. Neither of these cases provoked more than a few days of media coverage.

So what was it about the George Floyd story more than those two, and so many other similar stories, that shocked the world to its core, resulting in multiple protests and riots – and in some cities criminal looting by hooligans and villains, who used the killing and initial non-arrest of Derek Chauvin, the fired police officer whose knee on Floyd’s neck caused his death, as cover for heinous violence and thuggery?

Allow me to digress, as I must mention the fact that several synagogues and Jewish businesses were deliberately targeted by antisemitic hoodlums in Beverly-Fairfax, one of the most visible Jewish neighborhoods in Los Angeles. Vicious antisemitic graffiti was daubed on one of the oldest orthodox synagogues in Los Angeles, Congregation Beth Israel on Beverly Boulevard, as well as on the Kehillas Yaakov building. The Simon Wiesenthal Center noted that when hooligans “use the cover of protest … to attack synagogues and denigrate the Jewish state [it is] pure and simple anti-Semitism!”

In February 1998, I visited the legendary Nazi-hunter Simon Wiesenthal in Vienna, to interview him for a radio program I hosted at the time. It was a fascinating meeting, and he chatted with me for over an hour in both Yiddish and flawless English. I asked him countless questions, and every one of his answers was remarkable.

One of the questions I posed to him was this: “Do you think that there could ever be another Holocaust?” His answer was intriguing and wise. The war in Kosovo had erupted that very month, with reports of massacres and atrocities, which followed in the wake of similar atrocities by the Serbs in Bosnia in 1995.

Wiesenthal looked at me with his penetrating eyes and uttered words that will remain with me for the rest of my life. “There will always be genocide in the world,” he said, “and while Jews are not always the initial target of genocide – although they may not be first on the list, they will always be on the list. That is why we must constantly remain vigilant.”

The takeaway was simple, and is as relevant now as it was then. Even as we acknowledge and celebrate the first amendment rights of the many thousands who have come out to show support for African Americans who are targets of discrimination, the Jewish community must be particularly watchful and hypersensitive.

Insidious groups and individuals will inevitably use this opportunity to blame Jews and Israel, and target Jewish buildings and businesses, as well as visible Jews. Impugning and attacking Jews is always a priority for anti-Semites, for whom Jew-hatred is far more important than any other agenda. They may be in the minority now, but as bitter experience has taught us, and as Simon Wiesenthal so presciently pointed out, we must be mindful of the fact that a minority can evolve into a dangerous majority with lightning speed.

But back to George Floyd, and the “nekudah”. Watching the video which shows Chauvin’s knee on Floyd’s neck for almost nine minutes, hearing Floyd’s unheeded pleas and the multiple attempts by onlookers to get Chauvin to stop doing what he was doing, and then seeing Floyd’s limp and lifeless body loaded into the back of an ambulance, exposed us all to what we fear most of all – our own impotence.

We were all bystanders watching a man being killed, and we couldn’t do anything about it – all of our pathetic efforts were futile and pointless. He died. We could have and should have stopped it happening, but we didn’t.

Suddenly every American has had that ‘Eureka!’ moment, realizing how impotent they are in the face of such cruelty unfolding before their eyes, perpetrated by people who are funded by their tax dollars.

And truthfully – it woke people up to a fact we all desperately try to avoid considering. We see injustice around us and in front of us all the time. Occasionally we make a nominal attempt to do something that might mitigate an injustice, but when our efforts prove fruitless, we melt back into the comfort of our own lives and try not to think about what is happening outside our bubble.

We comfort ourselves with the notion that there are agencies and charities that deal with “all of that” and pretend that it has nothing to do with us. But it does. When cruelty is perpetrated in our name, we have a stake in it. And I, for one, do not want to have any part in the death of George Floyd, or Ahmaud Arbery, or in claiming an African American man is threatening someone’s life because he told them to leash their dog.

A number of people have pointed out that George Floyd had a history of violent crime, but while this is undoubtedly true, I’m not sure how it is relevant to his killing. The police who killed him were unaware of his criminal past, and even if they were aware – does that entitle them to kill him? Certainly not.

And so, notwithstanding the various organizations and individuals who have hijacked this situation for their own agenda – such as BLM, Antifa, Reverend Al Sharpton, and a host of others, and despite the fact that there are contemptible radicals and criminal elements who have taken horrendous advantage of the chaos, we – the good guys – must try to find something in this moment that will make us better people.

We don’t want to be impotent. What we do want is for every aspect of the country we live in, including law enforcement, to be something we can rightfully be proud of. Pursuing this agenda, even as we must remain mindful of our own Jewish concerns, must transcend all the disturbing static Floyd’s death has generated.

In the portion of Naso the Torah instructs those who need to bring a sin offering to confess their sin before the offering is brought (Num. 5:7): וְהִתְוַדּוּ אֶת חַטָאתָם אֲשֶר עָשׂוּ – “he shall confess the wrong that he has done.” The Torah is always very sparing with words, and clearly the words “that he has done” are superfluous in that sentence, as it is obvious that if he sinned, he must be the one who did it.

The giants of the Mussar movement point out that no sin ever happens in a vacuum, and when one has sinned it is always important to consider the circumstances which enabled you to sin, and then this lapse must also be part of the confession. It is the “that he has done” part of the sin, and it needs to be addressed just as much as the sin itself.

Or, to use a metaphor, anyone who takes their hands of the wheel or their eyes off the road is bound to have a crash at some point, and will need to consider their reckless driving as part of the process to ensure they never crash again.

As a society, it is important that we come to terms with, and try to change, the environment that has enabled police racism and brutality, rather than try to find excuses or distracting arguments. We also need to do whatever we can to ensure that people are never again forced to cower in their homes in the face of violent protests, looting and anarchy in cities across America.

Something is deeply wrong, and somehow we are a part of it. And rather than remaining impotent, we need to empower ourselves and do whatever we can to force the kinds of changes that will ensure that whatever it is that is wrong will be corrected, so that it does not happen again. It is this “nekudah” that counts most of all.