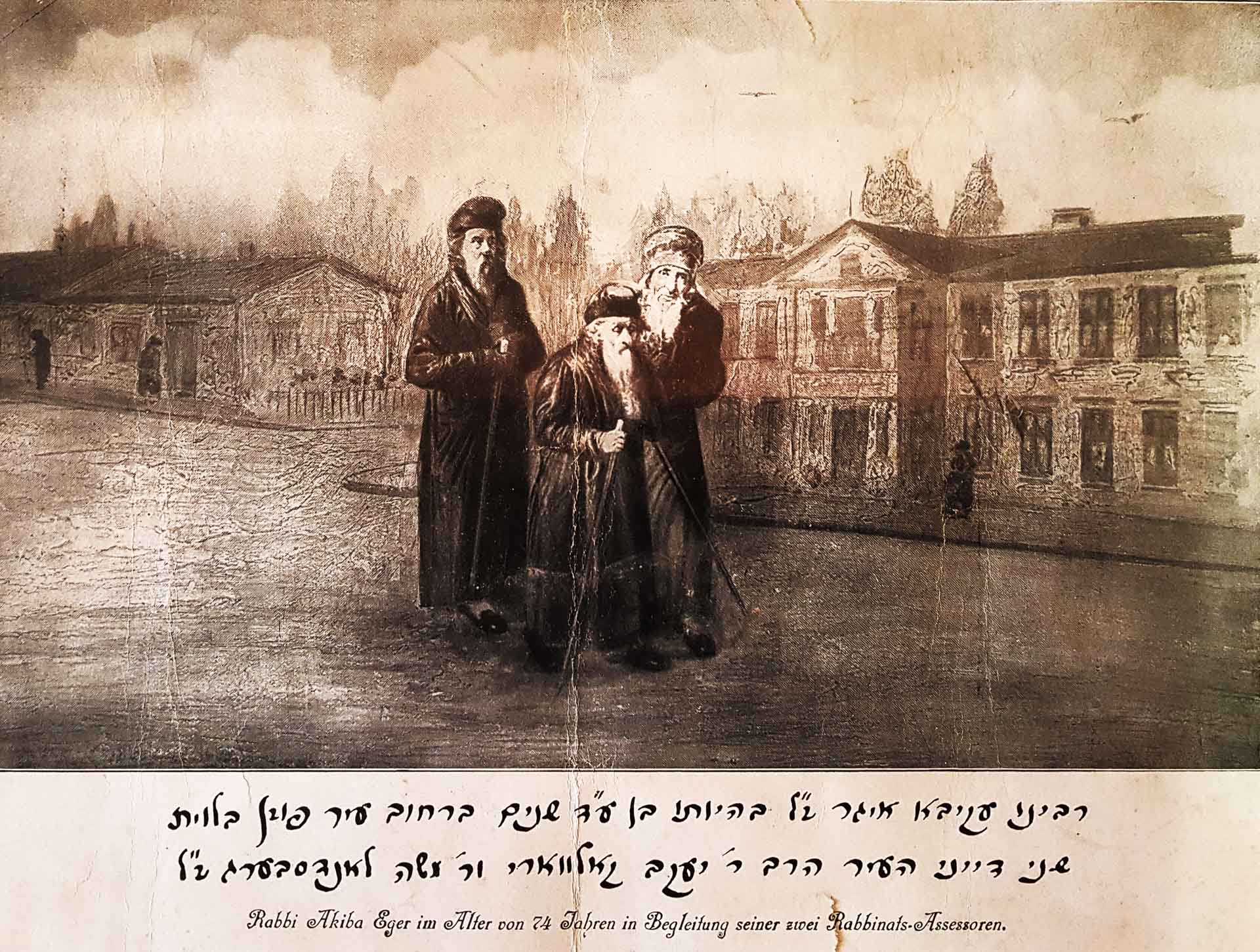 During the late 1820s and early 1830s, a cholera pandemic swept through Europe, claiming hundreds of thousands of lives. The medical community at the time had just begun to understand the concept of contagion, and there was much discussion regarding quarantine and isolation as methods of stemming the epidemic.

One of the most distinguished rabbis of that era was Rabbi Akiva Eger (1761-1837), chief rabbi of Posen, today Poznan in Poland, but then part of Prussia. Although Rabbi Akiva Eger was personally involved in caring for those stricken with cholera in his district – for which he was later recognized by Frederick William III of Prussia – he nevertheless advocated strongly for careful adherence to social distancing protocols, and insisted on minimized contact between members of the community, as evidenced by his letter to a junior colleague who wrote to ask him whether or not there should be minyanim at the local shul while the cholera epidemic persisted in the area.

The year was 1831, and this was the response Rabbi Akiva Eger sent back to his colleague, Rabbi Eliyahu Guttmacher (1796-1874), the rabbi of Pleschen near Posen:

His Honor’s letter has reached me, regarding prayer in the synagogue [during the epidemic].

In my view, it is true that gathering in a small space is inappropriate, but it is possible to pray in groups, each one very small — about 15 [people altogether]. [The groups] should begin with first light and then [there should be] another group, and each one [of these separate groups] should have a designated time to come and pray there. The same [process of different groups of 15 at different times should be used] for mincha.

And after each prayer, evening and morning, [each group] should recite Tehillim, certain psalms which His Honor should select, and then the text of Kel Rachum Sh’mecha, Aneinu Hashem Aneinu, Mi She’anah, and the Y’hi Ratzon [that one says] after Tehillim, mentioning in it [prayers for] the king [Frederick III], may G-d protect him, and his children and nobles and all who live in his land.

And every morning and evening, after reciting the portion of the daily korban [Pitum Haketoret] communally, they should recite the entire text of the incense, Atah Hu Shehiktiru etc. And to say afterward the Ribon text printed in the ma’amadot for Sunday after the ketoret.

And they should be careful that more people than the aforementioned quota [of 15] should not push their way into the synagogue, perhaps by using a guard from the police to oversee this. Once they have reached the [maximum prescribed] number [of 15], they should not allow others to enter [the building] until that group is finished. Set this request before the magistrate, and [let the magistrate know] that I have written this instruction for you.

And if they refuse [to comply], it would be good to arrange it with the local authorities. You will certainly succeed if you mention my name, and that I have instructed you not to have large gatherings in the synagogue in a small space, and also that I have advised you of these arrangements, and have cautioned you to recite Tehillim and pray for the king as well, may G-d protect him.

His Honor should collect, for each person, from the less important to the great, and even [on behalf of] infants in their mother’s womb, six large coins, and from that His Honor should fund saving [the] lives [of those stricken with the disease]. And if His Honor wishes to send me [some money] from this sum to save lives, I will do so wholeheartedly, and the money will be distributed to the needy.

And everyone should be very careful not to become cold. It would be good for each person here to wear flannel, belted over his belly, and not to eat bad foods, especially gherkins, and to reduce consumption of fruit and fish, and drink less alcohol, and not to eat [any more food] once you are full up, and it is better to eat a lot [of food in small amounts] over many times, each time [making sure] not to eat a lot.

Be clean. Don’t leave any filth or dirt in the home. This includes changing into clean clothing regularly each week. Do not worry. Distance yourself from any kind of sadness. Don’t walk about the city at night. During the middle of the day, when the sun is shining, it is good to stroll in the fields for air, and to open the windows in the morning so that air will enter the rooms [of your home].

Don’t go outside on an empty stomach. Eat some grains of mustard and take some oak bark. Use water to wash your face and hands every morning. Wash the floors of the rooms several times with strong vinegar, [and it is] better if it is mixed with rose water.

(The English text of this letter is based on a translation from the original Hebrew by Rabbi Mordechai Torczyner of Toronto. For the original Hebrew text see the image below, taken from Chidushei R. Akiva Eger, Nedarim 39, or click on the PDF link.)