Rabbi Pini Dunner · CHANUKAH - WHEN IS A MIRACLE A MIRACLE?

There is a well-known question regarding the miracle of Chanuka, most often associated with the “Beit Yosef,” Rabbi Joseph Caro (1488-1575), author of the definitive code of Jewish law (“Shulchan Aruch”).

The miracle of Chanuka is described in the Talmud as follows: uncontaminated oil which should only have lasted for one day lasted for eight days, giving the kohanim enough time to get new oil from Tekoa — a 4-day journey from Jerusalem — without the Menorah, which needed to be relit each day, missing a day of lighting.

The Beit Yosef’s question is simple: why, if the oil would definitely have lasted for one day, do we celebrate Chanuka for eight days? Chanuka should have been a seven-day festival, seeing as the miracle only really happened on the extra seven days!

Rabbi Dunner traverses through a range of answers, and also reveals an interesting historical debate regarding the origins of Chanukah, and how the miracle story became the festival’s central feature.

JUDAISM ON TRIAL – THE BARCELONA DISPUTATION OF 1263 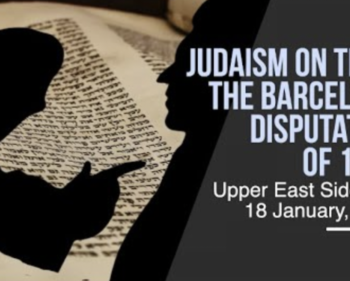 JUDAISM ON TRIAL – THE BARCELONA DISPUTATION OF 1263

One of the most fascinating and dramatic episodes to have occurred during medieval times was the public debate between the Ramban, one of the greatest rabbis of his day, and... Read More