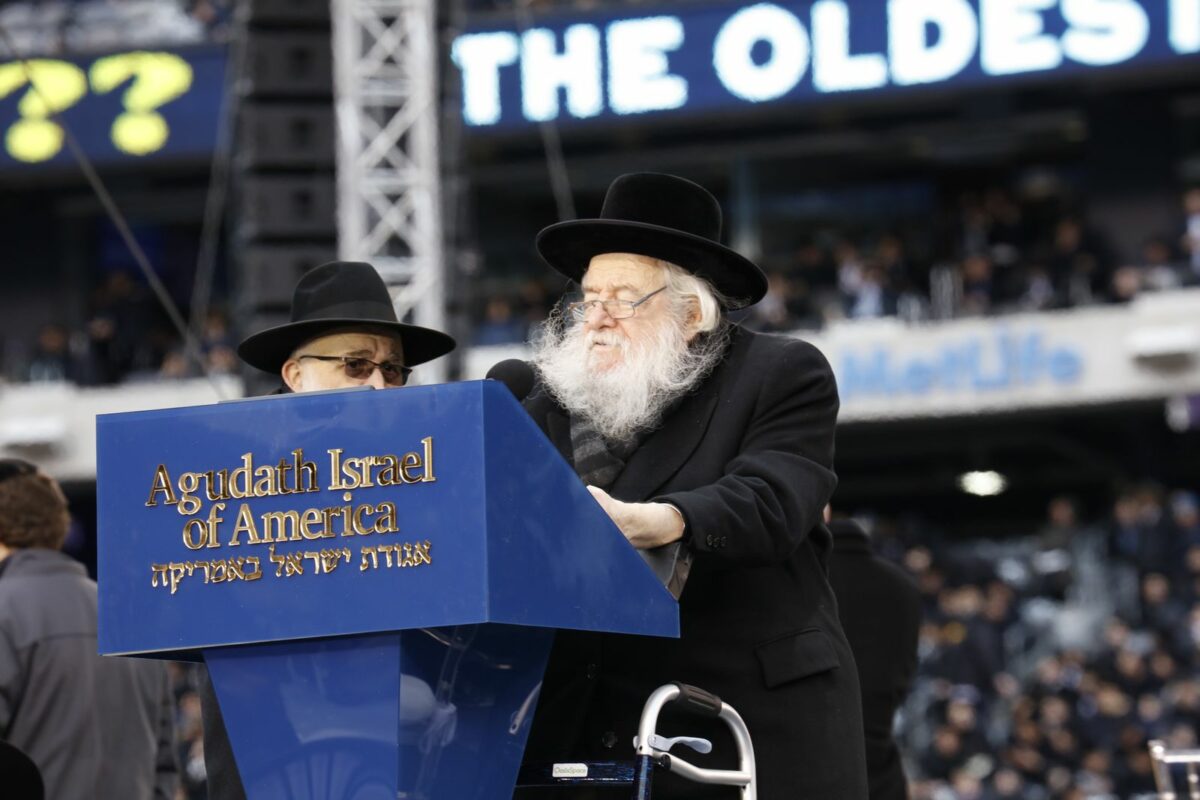 He looks earnestly at the camera, and falteringly begins his statement:

“Klal Yisrael (“the Jewish people”) and the entire world are now confronted by a medical crisis, by a time of distress, the kind of which was never seen before. We must be informed about the facts of this disease and what the expert doctors and the infectious disease specialists are telling us, in a unanimous way. We cannot behave today like we did last week or two weeks ago… The halacha is that we must listen to the doctors, whether it’s a sick person on Yom Kippur or a sick person that requires desecrating Shabbos… We have bowed our heads to these Heavenly decrees and have closed our shuls … and … our yeshivas, and even though they … continue to learn on the telephone … the halls of the Beit Midrashim have been emptied, and that itself is a major tragedy for us. Pray with concentration and learn as best you can… and have in mind that the Master of the Universe is the trusted healer and … should relieve us from all this pain, all these decrees, and show us the right path in life physically and spiritually.”

The black-hatted white-bearded speaker in the video is Rabbi Yaakov Perlow, the Novominsker Rebbe, revered 89-year-old leader of the Haredi orthodox Jewish community in the United States. As president of the prestigious umbrella organization Agudath Israel, his words carry weight and – particularly in a world where rabbinic guidance is of paramount importance – their import with reference to the safety of those he leads cannot be overstated.

The aforementioned video was released by Agudath Israel on March 20th of this year, just as the devastating effects of the coronavirus crisis began to hit the United States in a big way. Less than three weeks later, on April 7th, Rabbi Perlow died of COVID-19.

His second cousin, Susannah Heschel, eulogized him in a moving tribute in Tablet, telling readers that the whole Jewish world had been “diminished by the loss of an extraordinary person, a rebbe who guided us, uplifted us; a bridge builder and a model of how to be a Jew.” The New York Times called Rabbi Perlow “a persuasive orator and respected scholar”, while Forward noted that his loss “leaves a gaping hole in our community.”

Agudath Israel released a statement the day of Rabbi Perlow’s death, saying that “the loss to Klal Yisroel, and Agudas Yisroel, is incalculable”. Their statement also urged mourners from the Haredi community not to attend the funeral or burial, but rather to recite psalms at home in memory of the deceased rabbi. His funeral later that day, which in normal circumstances would have attracted tens of thousands of mourners, was attended by a tiny handful of socially distanced family members and cemetery officials.

The Novominsker Rebbe’s passing was indeed tragic, but before I delve into that, it is noteworthy that both shortly before he died, and in the actions surrounding his funeral, he led by example. It would have been easier for him to say nothing at all about COVID-19, like so many of his rabbinic peers, but it was certainly extraordinarily brave of him to say something as controversial as “we have bowed our heads to these Heavenly decrees and closed our shuls and yeshivas” – a move that was and remains as unprecedented as the coronavirus itself.

His tiny funeral also led the way at a time when it was only beginning to dawn on people how infectious COVID-19 was and is. Unlike the funerals of other notables that deliberately flouted protocols and were attended by large and careless crowds, Rabbi Perlow’s funeral showed restraint. Much more importantly, it showed leadership.

The tragedy of the Novominsker Rebbe’s passing – besides, of course, for the personal loss to his family and immediate associates – is that after having set the agenda at the genesis of what turned into a seemingly interminable emergency situation – namely: extreme empathy for the difficulties of adopting coronavirus safety measures in a tightknit traditional community, acute awareness of COVID-19 risks, and expert halachic realism – the organization he led and many of his peers have since that time utterly failed to lead at the exact moment when good leadership is so critical. Instead, if the ‘leadership’ appeared at all, it was always to respond to the demands of the community, for example to lobby for summer camps to open.

At no time since April has anyone led from the front by proactively presenting medical advice and evidence to the people who look to them for guidance. Moreover, there has never been, to my knowledge, any leadership attempt to explain the importance of following the law; instead, and quite shockingly – at least for someone like me, who grew up in the strictly orthodox world, a community that was always meticulously law-abiding and sensible – throughout this period rabbis and leaders have openly flouted or publicly demeaned coronavirus protocols, while remaining silent as provocateurs labeled politicians who insist on observing the protocols as antisemites and worse.

It is bad enough when the tail wags the dog during ordinary times, but in times like this – when lives are literally at stake – for leaders to only be reactive to community discomfort rather than striving to be its shepherds is nothing short of wholesale negligence. The stresses and strains associated with COVID restrictions coupled with the effects of the illness itself are undoubtedly immeasurable, but the leadership role is simple enough to define: be the voice of informed responsibility and not the leadership equivalent of a rabbit caught in the headlights.

Unfortunately, what we have seen is a vacuum of leadership that has left a void of information and – crucially – empathy, which in turn has allowed charlatans with insidious agendas to propagate distorted information, and to present themselves as leaders.

And to those who might protest that my assessment is too harsh, let me state clearly that this situation is not binary, in other words: it is not a choice between being completely and indefinitely locked up or having total freedom to do as you please. Rather, in the case of the Jewish community, it is about how we can safely open shuls and schools, or sensitively keep them closed, while making sure that as few people in our community are infected by the virus and/or affected by COVID-associated restrictions.

And obviously being a good leader in this situation is going to require making painful choices and unpopular decisions, but then again – being a leader, and particularly a faith leader, is not a bed of roses.

In the Torah portion of Lech Lecha we are formally introduced to our forefather Abraham, as he undergoes his first of ten tests (Avot 5:3), all of which he passed with flying colors.

The commentaries all struggle to understand the need for these tests – after all, Abraham was the founder of monotheism, a beacon of God-belief in a pagan swamp – why did God need to test him? Why did Abraham need to move from his comfort zone to a country that was new and inhospitable? Had he not already proven himself by being a God-believer in a world of God-deniers?

The consensus is that true faith can only be tested and proven through crisis and difficulty. Moreover, if you want to be a trailblazer and a leader, which Abraham clearly did, you must be able to withstand even the greatest challenges and still come out as a superlative example of faith.

In a truly remarkable piece, the Sfass Emess suggests that God’s instruction to Abraham to leave his land and go to an undetermined destination was not actually exclusive to Abraham. Others – perhaps they even believed in God – also heard the instruction or could have heard it, but took no notice. They felt their lives were fine, and were not willing to put themselves through any kind of trial or tribulation, or experience discomfort, as a mark of their faith. That is why we don’t know who they were, and why Abraham became the foundational figure of faith that we know him to be.

The late Novominsker Rebbe was an Abraham, willing to forego familiar aspects of his life and to encourage his community to do the same in order to demonstrate his utter faith in God. Those who should have replaced him after his passing are more reminiscent of those others in Abraham’s day, whose challenge-free version of faith disappeared when they did.

Let us pray that new Abrahams will emerge, and that they emerge sooner rather than later. Never before has the need been greater.