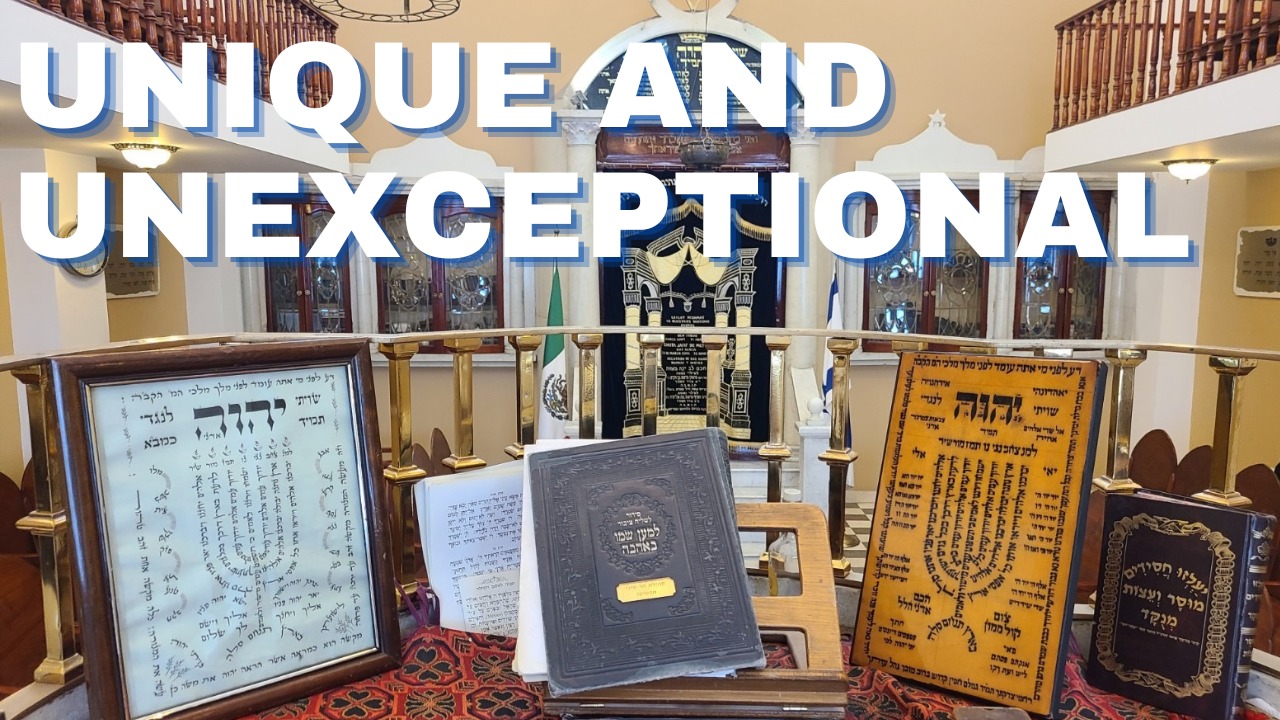 Last month, I traveled to Mexico City to attend a wedding. It was my first time in this sprawling capital city that nestles 7,350 feet above sea level (roughly a mile-and-a-half up in the sky) in a valley that was formerly a lake, surrounded by mountains and hemmed in by two volcanoes. Home to over 21 million people, Mexico City is one of the most populous cities in the world. It also boasts the most museums of any city in the world – more than 150 at the last count.

The Jewish population of Mexico City is a rather modest 40,000, with another 10,000 Jews living scattered elsewhere across the country. But what surprised me more than the low Jewish population count was this: even though Jewish community activity in Mexico is deep and rich, the history of Jews in Mexico is unexpectedly modern.

We engaged a guide to show us around the city, and our first stop was the “oldest synagogue in Mexico City.” As a seasoned Jewish traveler, I had expected a center of worship dating back centuries. After all, Mexico – as New Spain from the 1500s to the early 1800s – was a thriving, bustling country, and this was long before the United States came into its own. There should have been thousands of Jews.

But apparently, Jewish life was not possible in Mexico. Conversos (Jews who converted to Christianity but secretly practiced Judaism) settled in New Spain very early on, but they were intermittently persecuted by the catholic church and officers of the Inquisition, while openly practicing Jews were forbidden residence in any Spanish colonial territory. Which is why the “oldest synagogue in Mexico City” was built in 1923.

Curiously, Mount Sinai Congregation was not founded by European immigrants, but by immigrants from Damascus, whose journey from Syria to Mexico is fascinating – unique and unexceptional at the same time, about which more in a moment.

Located at Calle Justo Sierra 83, the unassuming Mount Sinai synagogue building is just one unit in a terraced parade that abuts a public square, at the opposite end of which stands the rather more imposing Nuestra Señora de Loreto Church – the last major church constructed during the colonial period, completed just over a century before Mount Sinai.

Much changed during that century – Mexican independence; war with Spain; war with the United States; civil war; the strange interregnum of a royal ruler – Austrian-born king Maximilian I; and, between 1910 and 1920, a violent revolution. The upshot of this endless turbulence was that it drastically decreased the stifling control of the catholic church, best symbolized by the “La Reforma” liberal reform laws passed in 1850, which created an opportunity for Jewish immigration that had never previously existed.

And, as the Ottoman Empire crumbled, the Jews of Syria – in spite of 2,000 years of history in the Levant – began to look for new opportunities. Many came to the United States, but a few ended up in Veracruz, the venerable port city on Mexico’s east coast. They all spoke the Sephardic dialect Ladino – a mixture of mainly Old Spanish and some Hebrew, with the odd Arabic and Aramaic words thrown in – as their first language.

For Ladino speakers, learning Spanish was easy, certainly far easier than English, and many of the immigrants – including our guide’s great-grandfather – sent for relatives who were struggling to make a living in New York, and before long Syrian Jews thrived in multiple businesses across Mexico.

After a few years, with the community growing and Mexico relatively tranquil, the Mount Sinai synagogue was built – followed a few years later by Congregation Nidje Israel for Lithuanian Ashkenazim just up the block.

We hovered outside Mount Sinai for a few minutes. An unyielding security guard informed our guide that the synagogue was not open for tourists. “But he’s a rabbi from California, he’s here to pray,” she told him. He glowered across at me menacingly, and then consulted a young man in a baseball cap who was entering the building. The man glanced at us and smiled – “sure, come on in, we are about to daven mincha.”

A small group had gathered, perhaps a dozen altogether. None of them live locally, and weekday afternoon services are now the only regular prayers at the recently renovated synagogue. Fortuitously, we had arrived at exactly the right time.

“Baseball-cap man” rattled through the Amidah repetition on the quaint bimah structure at the center of the attractive Middle-Eastern-styled sanctuary, and we all responded Amen to each blessing.

Suddenly I was struck by an incredible thought: the story of Jewish immigration and settlement may be different in each place, but the end result is always the same. Wherever Jewish immigrants arrived, they built synagogues and schools, and they set up social welfare organizations to look after the needy. And every day they davened mincha together.

Mexico’s Jewish immigration story is undoubtedly unique, and yet it is also unexceptional. Any place Jews go, and every place they end up, the furniture of their lives remains familiar – they faithfully retain the traditions of their origins even as they adopt some of the idiosyncrasies and quirks of their newfound home.

In Parshat Massei, we read about the forty-two stops on the winding journey across the Sinai wilderness from Egypt to the Promised Land. For some of the stops the Torah includes minor details of what was done there before moving on, or what happened to the nation in that particular location, while for many of the other stops there is no associated narrative. However, all the stops begin with the Hebrew word “vayis’u” – “they traveled,” and conclude with the word “vayachanu” – “they encamped.”

The need for “vayis’u” is obvious, but why the need for “vayachanu”? Surely the name of the destination would be sufficient without the additional word?

Evidently, whether or not something of significance happened when they arrived at their destination, each move was traumatic, having required “vayis’u” – being uprooted from somewhere comfortable and familiar. And yet, each “vayis’u” was followed by “vayachanu” – a total focus on enabling continuity and a connection with where they had come from, even if they were now in unfamiliar territory.

And whether it is with reference to some anonymous spot in the Sinai desert, or Mexico City, or Ellis Island, or London’s East End, or indeed Eretz Yisrael – throughout Jewish history the hallowed traditions of our origins have kept us firmly rooted in the past. So much so, that even when we have had to leave our comfort zones, we have somehow found the energy to remain true to who we are, wherever we are. Which, of course, is why we are all still here.