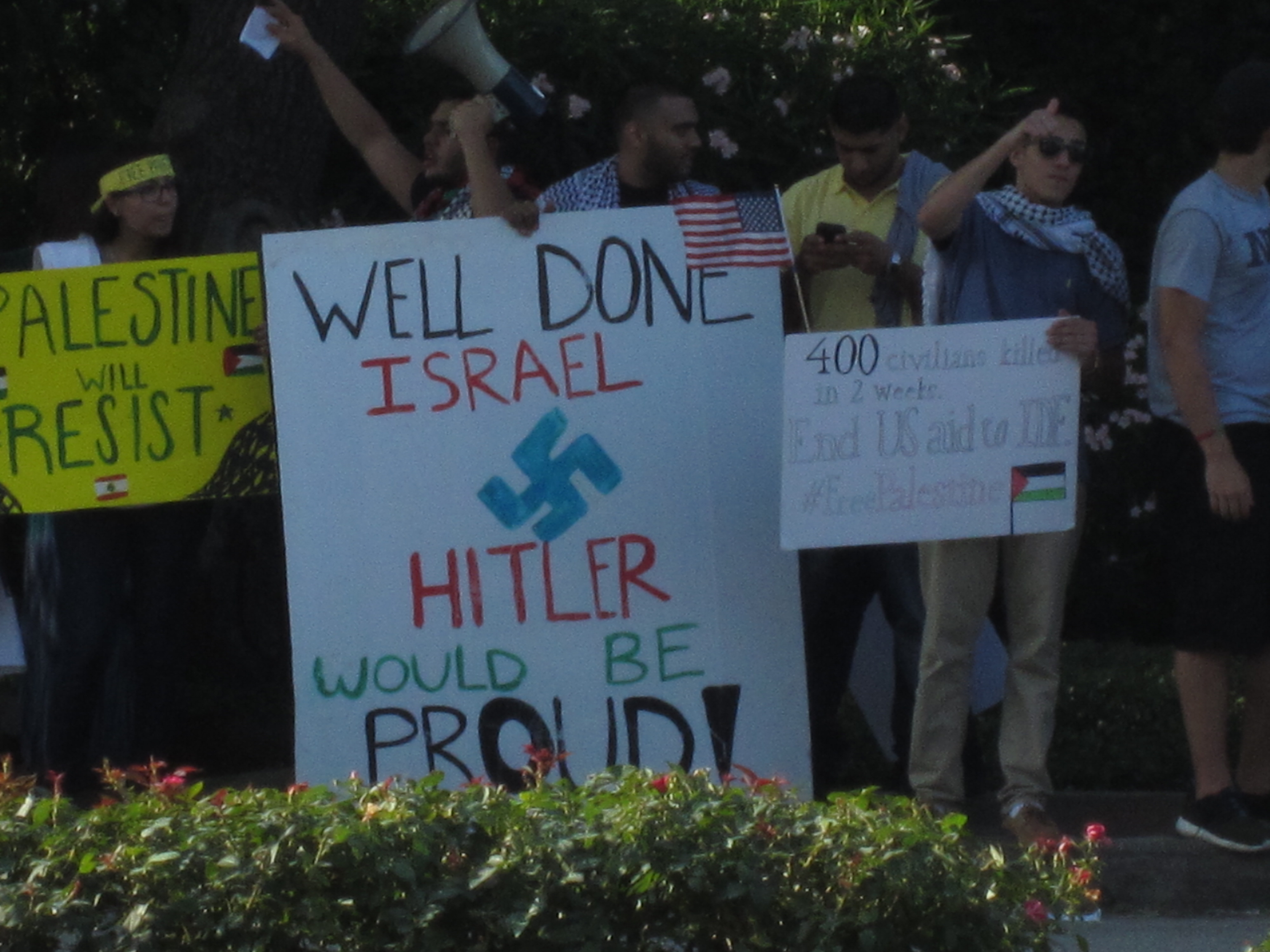 There is an unwritten rule in the western media that to compare Israeli actions against Palestinians to Nazi war crimes during World War Two is unacceptable.

This, the unspoken code implies, is a step too far, a hit below the belt that no justification can rectify.

The code has, however, been broken over the past few months. More often than not this has been in articles where a Palestinian spokesman has been quoted making a version of this allegation.

In other instances, it has been subtler, noticeable only to those sensitive enough to recognise the change of language and imagery used with reference to Sharon and Israel.

The words ‘holocaust’, ‘pogrom’, ‘massacre’, and ‘war crimes’. The language is similar to that used by the press over recent years when referring to Slobodan Milosevic and Yugoslavia.

It is particularly insidious when you reckon that Milosevic and his undemocratic regime actually were involved in war crimes, whilst Israel, it would seem from reports by independent aid agencies, has assiduously avoided the killing of civilians despite hysterical condemnations before the facts about recent incursions became known.

Pro-Palestinian protesters and the Islamic media have never been shy of using the Israel-Nazi comparison in headlines, banners and speeches, although since the farcical UN conference on racism in Durban last Summer there has been a marked increase in both volume and venom.

Last month, at the so-called anti-capitalist rally in Washington that turned into a Sharon/Bush hatefest, one popular banner motif mixed the Nazi Swastika and the Star of David. To make sure that the point was driven home the crowd repeatedly chanted, “Sharon and Hitler are the same, the only difference is their name.”

So what are the comparisons? How, even in the minds of those who spout these horrific allegations, can Israel and Jews be compared to those who perpetrated the greatest crime against humanity in the history of humankind?

The spurious argument goes that the military might of Israel, comparable to the militaristic Nazi war machine, is directed against a beleaguered Palestinian population who live in sprawling shantytown refugee camps. Military restrictions mean that the average Palestinian is confined to his town or village, like Jews confined were to ghettos, and that Israeli soldiers at checkpoints humiliate them in the same way that the SS humiliated Jews.

Israel, the superior enemy, targets and kills Palestinians, just as the Nazis preyed on powerless Jews during the Holocaust. Israeli oppression and the occupation of the West Bank parallel the aggressively executed expansionist policies of Hitler’s regime, and are a nationalist anachronism in the post-modern, twenty-first century world.

So there you have it. A neat thesis, that seems to hang Israel with its own Jewish rope. The Jews have been going on for decades about the crimes perpetrated against them by Hitler, and when given the chance, they behave identically towards the Palestinians.

The trouble is that the accusations don’t match the facts, and the inhuman crimes of the Nazis are hardly similar to the actions of Israel against the Palestinians. In fact, there is nothing more sick then a vile lie that in some kind of warped way gets the western world off the hook for having stood by whilst six million Jews were slaughtered across Europe between 1939 and 1945. ‘It was a terrible crime, but the Jews are no better,’ is possibly the most disgusting aspect of this unacceptable comparison.

So why are these allegations without foundation? Simply, because no Jew wants the Palestinians to suffer. Because no Israeli has as his ultimate objective the obliteration of Arabs and Muslims from the face of this Earth. Because what every Jew and certainly every Israeli would like, is for Jew and Arab to live side by side in peace and tranquility. Because what every Jew resents is the fact that Israel can only exist because of military might, and that its survival depends on it.

The ‘Zionism is Nazism’ accusation is without foundation, superficial and twisted. No Jew has ever herded any Palestinian into a refugee camp, recently or in the past. Whether or not Arabs left their homes in Palestine of their own accord, or were chased out by Israel after the declaration of independence in 1948 is something that is debated by historians.

What is beyond debate is that hundreds of thousands of Jews who lost their homes on the Arab side of the Armistice Line in Palestine, or in Arab countries across the Middle East, were absorbed successfully by a fledgling Israel in the years that followed. No such effort was made by Arab countries to absorb or even improve the conditions of Palestinian refugees in the twenty odd years before the six-day war of 1967.

I don’t hear pro-Palestinians referring to Egypt’s Nasser as a Nazi for allowing inhuman conditions to flourish in Gaza’s disgraceful, ghetto like refugee camps. Nor recently. Millions of dollars have been pumped into the Palestinian Authority coffers over the past eight years from EU funds that include British taxpayers’ money. Why hasn’t Yassir Arafat used this money to alleviate his own people from their life of squalor and the ramshackle accommodation? Does that make him incompetent? Yes. Corrupt? Probably. A Nazi? Hardly.

What about the oppressive military restrictions? Don’t they compare to the restrictions placed on Jews that got steadily worse, leading ultimately to the ‘Final Solution’? Most certainly not! The Jews of pre-war Europe were no threat to anyone, least of all Nazi Germany. They were not armed or primed to hate Germans, fed propaganda that allowed them to justify indiscriminate killing of civilians. They didn’t harbour terrorists and allow them to operate from their homes. They didn’t produce crazed killers who would stop at nothing, including the taking of their own lives, to perpetrate massacres against civilians.

The aggressive Nazi military machine that targeted European Jewry was gratuitous and evil. The military actions that restrict the lives of Palestinians are the direct result of their Palestinian violent actions and rhetoric, and were Palestinians only to ensure the end of violence against Israel and its civilians, the military ‘oppression’ would end overnight. And no one would be happier then Israel.

The targeted killings of Palestinian terrorist kingpins are undoubtedly the ugly side of a difficult war. With operations against Israel by terrorists on the increase, and co-operation against terrorism with Palestinians non-existent, Israel can hardly be accused of Nazi tactics though, when it targets those who make clear that no atrocity against Israel and Jews is an atrocity too far.

Imagine if the Republic of Ireland would refuse to co-operate in the arrest of the Omagh bombers who were living openly in Dublin, and who were planning and executing Omagh bombs on a weekly basis across the United Kingdom. Would we accuse Tony Blair of being a Nazi if he had them assassinated? I think we would applaud him.

The ultimate accusation, the one that accuses Israel of being an expansionist, nationalistic, occupying power, like the Nazi Germany that expanded it’s territory across Europe like a cancer, is the most unjustified lie of all. Israel agreed to a division of its historic birthright – the Biblical Land of Israel – when it welcomed the UN Partition Plan of November 1947.

Since then it has been willing to offer ‘Land for Peace‘ on numerous occasions only to have this rejected by Arab intransigence, with the exception of Egypt that signed a peace treaty with Israel in 1979 after accepting the entire Sinai in return.

This ‘land for peace’ agreement included the dismantling of Israeli settlement towns. But ‘land for peace’ means just that – land vacated by Israel in exchange for the end of violence and terrorism.

It can hardly mean that Israel gives up the only bargaining tool it has – land – in exchange for increased violence and even more atrocities against its civilians. And if Israel moves back into land already given up in order to locate those who are violating their agreements they can hardly be accused of either being expansionist or of violating the agreements themselves.

Anyone who allows a Jew or an Israeli to be compared to Hitler and the Nazis is guilty of gross misinterpretation at best, and at worst of being a Jew hater of the worst kind.

So when you next spot the repellant banners at a pro-Palestinian demonstration, or hear Israel’s defense against terrorism being compared to Nazi aggression, remember that this is all part of the vicious propaganda war against Israel.

The aim of this war is to turn Israel into a pariah country, whilst legitimizing the evil terrorist campaign that rages on at every opportunity.