THE DANGERS OF GROUP DYNAMICS 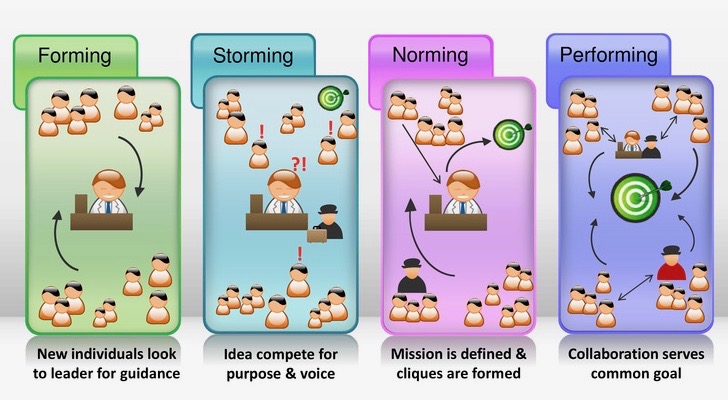 A couple of months ago I wrote a piece about the German-born social psychologist, Kurt Lewin (1890-1947).

Although most people have never heard of him, Lewin was utterly unique, an innovative pioneer in many areas of psychology and sociology at a time when both of those fields were still very much in their infancy. His extensive research and rigorous studies continue to affect every one of us in ways we are not even aware of.

Lewin coined the term ‘group dynamics’, and extensively researched how groups of people behave when they are together, both internally within the group, and as a group towards others. The central idea that underpins ‘group dynamics’ is that the behavior of an individual will change when they are part of a group.

Nowadays Lewin’s research is often used in management schools to teach the mechanics of team building, using a model proposed in 1965 by the eminent psychologist, Professor Bruce Tuckman (1938-2016), called “forming–storming–norming–performing”, which charts the development of a successful team through four separate stages.

The important point is this – group dynamics is an extremely powerful force, and when exercised efficiently it can produce incredible results.

But there is also a dark side to group dynamics – the power of the group can overwhelm a person’s individual desire to do the right thing, leading to situations in which good people do bad things as a result of the overwhelming impact of group dynamics.

In extreme cases this phenomenon can be manipulated by corrupt or evil people – with dreadful results. This is why seemingly normal people join destructive cults, or fall under the spell of evil ideologies, such as Nazism or radical Islamism.

Group dynamics should not be used as an excuse for individuals who perpetrate evil as a result of group dynamics. On the contrary, it is precisely the dangers of this phenomenon that must be at the forefront one’s mind if we find ourselves slipping into undesirable behaviors. We need to be thinking: “is this happening because I am part of a bad group?”

Most importantly, we need to be aware that no one is immune to the effects of group dynamics, nor is anyone its slave, as is evident from the quite remarkable episode of the twelve “spies” sent by Moses to check out the Land of Canaan, found at the beginning of the Torah portion of Shelach.

The text reveals that each of the twelve men sent by Moses on the mission was distinguished and upstanding (Num. 13:3):

How was it possible for this team of extraordinary individuals to betray God’s plan, and to return from Canaan with negative information? Not only were they from the generation that stood at the foot of Mount Sinai, who heard God’s voice – they were its leaders! How does their treachery make any sense?

As if this is not puzzling enough, there were two of them who did not abandon the mission in favor of a divergent scheme: Joshua and Caleb. What was it that enabled them to stay loyal while the other ten went rogue?

The commentaries offer a range of answers to explain the mysterious transformation of ten honorable men into agents of disaster. The text itself offers us very few clues, although there is at least one clue within the text that reveals the mechanics.

Although the ten spies are initially named individually, once the mission began they are no longer named as individuals. Instead they are referred to as a group, or refer to themselves as a group: “they stated”, “they spoke”, “we saw”, “we were”.

It is unlikely that they all delivered the report at the same time in unison. Rather it must have been one or two of them who acted as spokesperson for the whole group.

And yet, no individual from the group is named as the spokesperson. Evidently, however illustrious each of them may have been at the outset, as a group they had brought out the worst in each other, and whoever it was that spoke was not speaking as an individual – he had been reduced to a mere mouthpiece for collective evil.

Meanwhile, Joshua and Caleb are mentioned by name as having spoken out in favor of the land. In Joshua’s case Moses had changed his name before he left to include a reference to God, fortifying him from any negative influences, while Caleb took time out during the forty day expedition to visit the tombs of the patriarchs and matriarchs in Hebron, which we are informed was to protect himself from the insidious influence of his colleagues.

The powerful lesson from these two great men is that the only protection against falling prey to negative group dynamics is vigilance. Even if you are entirely honorable, as part of a group you must be constantly aware and conscious of the core values you cherish and championed before you joined the group. Otherwise you will inevitably become faceless and nameless, part of a mob that can descend to the lowest common denominator.

Particularly in our times, when masses of people subscribe to ideologies and beliefs that contravene our fundamental Jewish values, we must be attentive and mindful that we don’t fall prey to the malign influence of group dynamics, but instead stand up for what is right, like Joshua and Caleb, who, as a result of their conviction and courage, merited to enter into Promised Land.