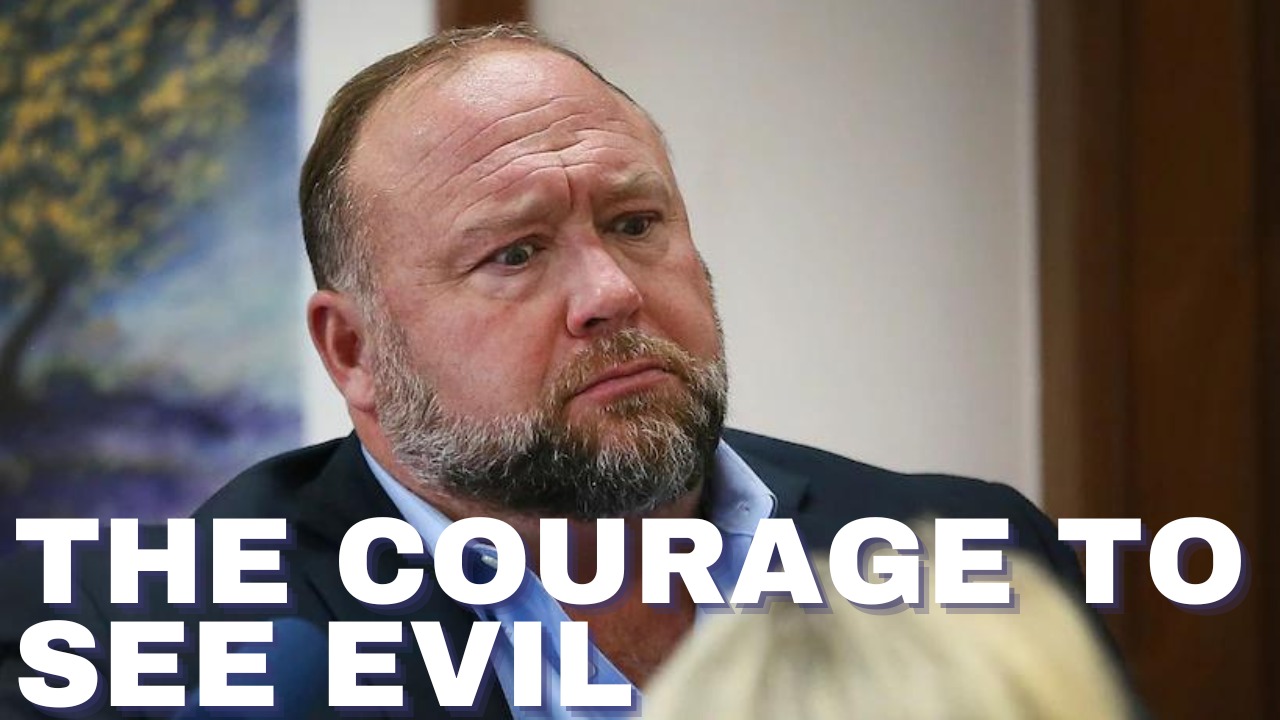 Recently, my good friend, Seth Siegel, sent me his latest book, Other People’s Words, a fabulous collection of more than 1,200 pithy quotations from the great and the good, on every topic imaginable.

On the topic of evil, Seth cites two quotations that underscore the greatest challenge of our age – the seeming inability of western societies to adequately challenge evil in their midst, resulting in an ever-growing decay that threatens to overwhelm the kind of life we all take for granted.

The second, from former German foreign minister, Joschka Fischer, dovetails perfectly with Sharansky’s observation: “It’s not in our hands to defeat evil, but it is in our hands to limit it.”

Both of those quotes came to mind this week with the long-awaited defamation trial of the odious shock-jock and conspiracy theorist, Alex Jones. He is the epitome of an insidious evil that has slowly encroached its way into decent society, to the extent that not only is it now entirely legitimate and “normal” for intelligent, fair-minded people to believe in destructive conspiracy ideas, but it is also okay to promote them and act upon them without fear of being ridiculed or marginalized. Hiding behind First Amendment free-speech protections, Jones has promoted the most awful lies imaginable, leaving havoc in his wake, and causing untold pain to countless innocent people.

The reason you need courage to see evil in the free world is because free world evil hides under the guise of free speech and freedom of expression. We want our world to remain free – so the best we can do is limit evil; defeating it entirely would undermine the freedoms we cherish and value.

This week was a game-changer. The Alex Jones trial has opened our eyes to the destructive evil he and others like him represent, and perhaps for the first time ever, we saw the power we have to limit that evil.

To clarify – Alexander Emerick Jones is, by any objective standards, a nonentity. An uneducated blowhard, he has been on the frontline of conspiracy theory promotion, selling fake news as well-researched journalism for well over two decades. His InfoWars website is a cesspool of far-right bilge, including the promotion of antisemitic tropes. In 2016, he declared that all of America’s problems are the fault of “the Jewish mafia” – “they run Uber, they run the health care, they’re going to scam you, they’re going to hurt you.”

And yet, millions of Americans tune into the Alex Jones Show every day, lapping up his rants on news and politics, and absorbing his evil lies, which then feeds into their worldview and influences their voting decisions. Jones’ meteoric rise and resulting popularity has emboldened him over the years, allowing him to become ever more outrageous. His most egregious lie is the one that ultimately brought him into the Texas courtroom, finally giving us the courage to look his evil straight in the eye and – hopefully – to limit that evil once-and-for-all.

On December 14, 2012, 20-year-old Adam Lanza murdered his mother, and then went into Sandy Hook Elementary School in Newtown, Connecticut, and murdered 20 children and 6 adults, before turning the gun on himself and committing suicide. It remains the worst-ever school shooting in U.S. history.

But Jones disagreed. Soon after the massacre, he announced that the Sandy Hook mass shooting was a “false flag” operation, a hoax carried out on behalf of the U.S. government by “crisis actors.” As if that wasn’t enough, in 2014 he doubled down with a new conspiracy claim that no one had died at Sandy Hook Elementary School, and that the so-called victims were in fact all “child actors.”

That these kinds of claims are evil and malicious is self-evident – but that anyone would believe them seems inconceivable. Apparently not. Residents of Newtown and relatives of the victims reported numerous instances of harassment over the years, even death threats, by “Sandy Hook truthers” who justify their cruel actions on the basis that Jones had got it right.

Despite the ugly real-life consequences of his ridiculous claims, Jones still maintained that Sandy Hook was a lie. When the father of one of the victims, Jeremy Richman, committed suicide in 2019, Jones went on air suggesting that he’d been murdered by people who wanted to distract attention away from Robert Mueller’s report on Russian interference in the 2016 election.

The second-century Greek philosopher Sextus Empiricus said, “the wheels of justice turn slowly, but they grind exceedingly fine.” Although Jones has tried to turn his Texas defamation trial into a quasi-reality TV show, the court process has been unforgiving and unrelenting. Jones has been forced to concede – on the record and under oath – that the Sandy Hook massacre was “100% real”; that it was “absolutely irresponsible” for him to have promoted falsehoods about the shooting and its victims; and – while facing her, just 10-feet away – that the mother of a Sandy Hook victim who is suing him is not an actor.

Even more stunningly, he was exposed as having lied under oath, when it was revealed that his attorneys had inadvertently sent opposing counsel all of Jones’ cellphone records for the past 2 years, including texts about Sandy Hook he claimed he’d never sent.

Watching the trial footage is like watching a car crash in slow motion. Jones is no longer the cocky, smug oracle of far-right “truths.” He is merely a slovenly, stuttering, self-serving slob attempting to slither his way out of the hole he has dug himself into while desperately, if somewhat unsuccessfully, trying to maintain his dignity. Everyone can now see the evil, and everyone can watch the limits being imposed on that evil. It is a cathartic moment of the first order.

How apt that this moment has occurred during the week that we begin reading the fifth book of the Torah, Sefer Devarim, which begins with an astounding rehash by Moses of everything that happened since the Exodus from Egypt forty years earlier.

No wart is left unexposed, and we get to look underneath every rock. It is not a pretty sight. Long forgotten stories are brought into the spotlight, while others we thought we knew are given a totally different spin, such as the incident of the spies sent to scout out Canaan. The rather convenient narrative that this abortive mission was the result of God conceding to Moses’ personal request, is now revealed as having been a mob-generated demand for Moses to send out an advance party.

The gist of this introductory passage carries its way right through to the end of the book, with the theme of evil presented as the result of human weakness – a propensity to look the other way rather than halt evil in its tracks as it advances inexorably into our day-to-day lives.

Moses understood that if evil is ignored, or brushed under the rug, or allowed to fester somewhere where we think it doesn’t affect us – rather than dying, its tentacles will inevitably creep their way into our lives, causing devastation and destruction.

By bringing up evil and exposing it wherever it exists or has existed, and by championing its opponents, we may not defeat it, but we will have gone a long way towards limiting it. This, I believe, is a thread that winds its way right through Sefer Devarim, and has evolved into the most prominent theme of our Jewish faith.

I will close with the words of John Stuart Mills: “Let no one pacify his conscience by the delusion that he can do no harm if he takes no part and forms no opinion. Bad men need nothing more to compass their ends, than that good men should look on and do nothing. He is not a good man who, without a protest, allows wrong to be committed in his name, and with the means which he helps to supply, because he will not trouble himself to use his mind on the subject.”

Moses knew it, and this week – as we watched Alex Jones being reduced into a heap of spluttering platitudes – we can know it too.