THERE’S MORE THAN ONE MR PRESIDENT 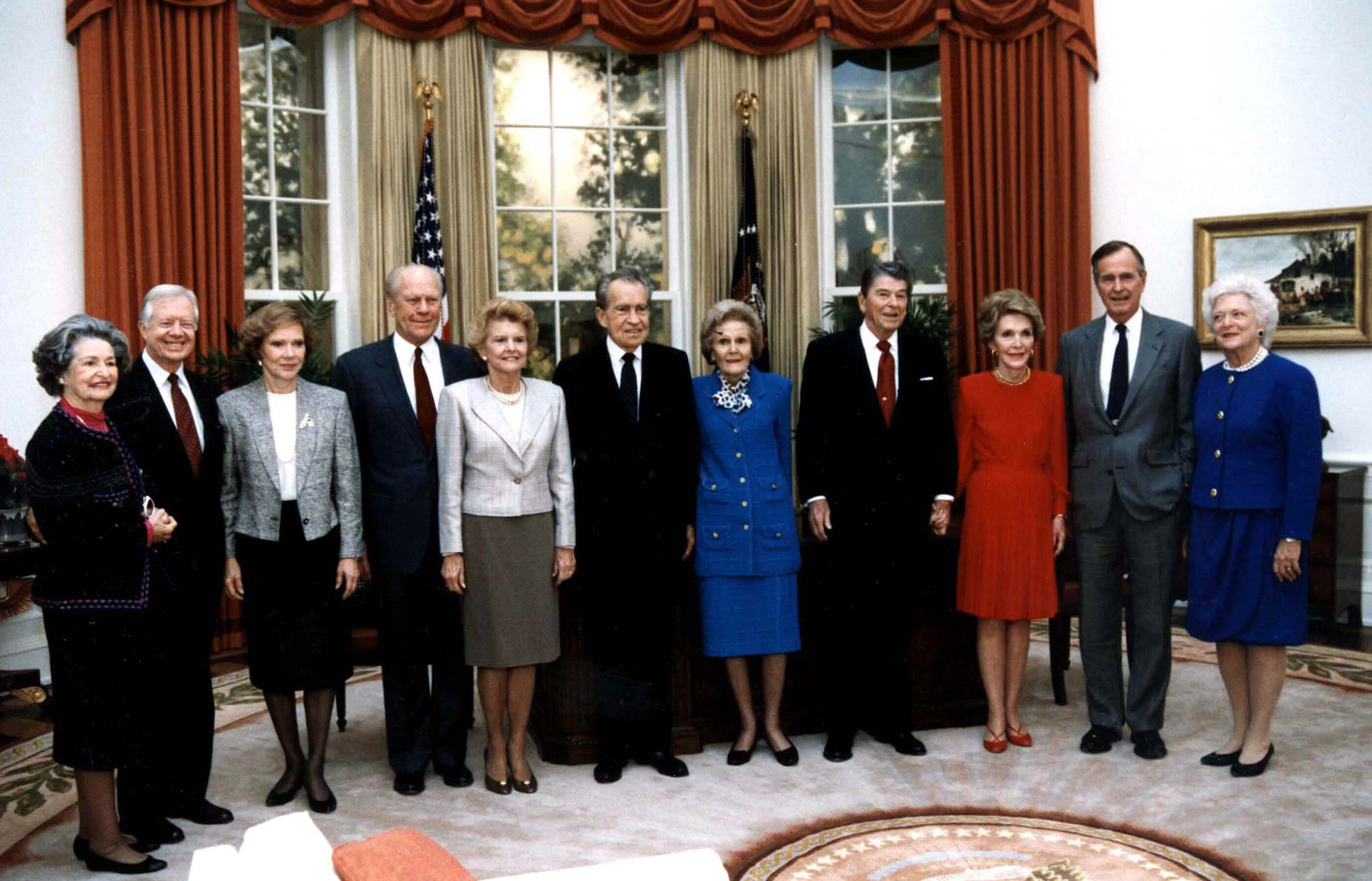 On December 5, 2018, four former US presidents and their wives attended the funeral of George H.W. Bush in Washington DC – Jimmy and Rosalynn Carter, Bill and Hillary Clinton, Bush’s son George W. Bush and his wife Laura, and Barack and Michelle Obama.

As it happens, the attendance of so many former presidents at the elder Bush’s funeral was not a record breaker. The first time four ex-presidents were together in one geographic location was in November 1991, at the inauguration of the Ronald Reagan Presidential Library, and there have been a number of similar occasions since.

Moreover, even the phenomenon of five living ex-presidents from January 2017 until Bush sr.’s passing was not a first; in 1861, after the inauguration of President Abraham Lincoln, there were five living ex-presidents: Martin Van Buren, John Tyler, Millard Fillmore, Franklin Pierce and James Buchanan—although it is unlikely these five were ever together in one place, particularly after Tyler was elected to the Confederate House of Representatives, while the more recent five ex-presidents did meet and spend an evening together, at the “Deep From the Heart” hurricane relief concert in Texas, in October 2017.

The United States has an interesting etiquette when it comes to former presidents—despite it attracting the attention of protocol critics. For the remainder of their lives after they leave office former presidents are always referred to as “Mr President”, or “President” followed by their name, rather than as “Former President”.

Which makes Jimmy Carter – who served as president for just one term but is the longest-serving ex-president in US history – the only president of the United States to be referred to as Mr President for well over forty years.

Even referring to them all as “President” followed by their names would be quite disconcerting, particularly for the sitting president, whose stature and self-esteem would surely feel diminished in such unusual circumstances.

In the portion of Tetzaveh the Torah introduces us to the concept of a Jewish High Priest, the person appointed to preside of the most elevated ritual affairs of Judaism in its most sanctified location – the Temple.

The Talmud (Meg. 9b) records a debate between Rabbi Meir and Rabbi Yosi regarding the status of a former high priest, understood to mean someone who has served as interim high priest until the official high priest becomes available to take up his post once again.

Rabbi Meir argues that the former high priest still retains the status of a high priest in a number of significant ways, and should therefore resume regular temple duties after stepping down, but still wear the vestments of the high priest.

Rabbi Yosi disagrees. In his opinion the former high priest is in a kind of professional limbo. Wearing the vestments of a high priest while doing the duties of the temple is out of the question, as doing so could upset the incumbent.

But at the same time the ex-high priest cannot possibly carry out temple duties in the vestments of an ordinary priest, as this would violate the principle of מעלין בקודש ואין מורידין – “one may elevate a level of sanctity, but one must never reduce it.”

The medieval rabbinic Talmud annotators, Tosafot, are puzzled by the use of this principle, and pose the following question: if it makes sense for the former high priest to be treated like a high priest, and the only reason not to do so is to avoid hurting the feelings of his replacement, why does Rabbi Yosi invoke the principle of not lowering levels of sanctity to explain why a former high priest cannot revert to his status as an ordinary priest?

Tosafot offer an intriguing answer. Just like public officials in the modern world, a high priest can be impeached by order of the king or by a vote of the priestly caucus. Appointment to the high priesthood is a privilege, not a guaranteed lifetime position.

Consequently, were it not for the concept of not reducing levels of sanctity, the presumption would be that an impeached high priest goes back to being an ordinary priest, and in that role wears the vestments of an ordinary priest.

It is only because we cannot reduce sanctity once it has been elevated, that even someone whose unsuitability to the high priesthood resulted in his impeachment can never be treated as ordinary again.

Whatever the personal qualities or failings of a high priest may be, or a president for that matter, to be treated as commonplace after having held such an elevated position would be an affront to the position they once held.

It is the duty of society to sustain the eminence of a leadership position, a worthy goal that was as evident to the sages of the Talmud as it is now.

Another uniquely American tradition is for former presidents to leave a handwritten note to their successor, and to leave it on the Oval Office desk for them to open and read on their first day as president.

Partisanship and personal rivalries are set aside, with the departing president offering words of encouragement and support to their replacement.

The most poignant such letter in recent memory was certainly the one from George W Bush to Barack Obama:

Very few have had the honor of knowing the responsibility you now feel. Very few know the excitement of the moment and the challenges you will face. There will be trying moments. The critics will rage. Your “friends” will disappoint you. But, you will have an Almighty God to comfort you, a family who loves you, and a country that is pulling for you, including me. No matter what comes, you will be inspired by the character and compassion of the people you now lead. God bless you.”

Worthy and inspiring words, particularly in these very troubled times. 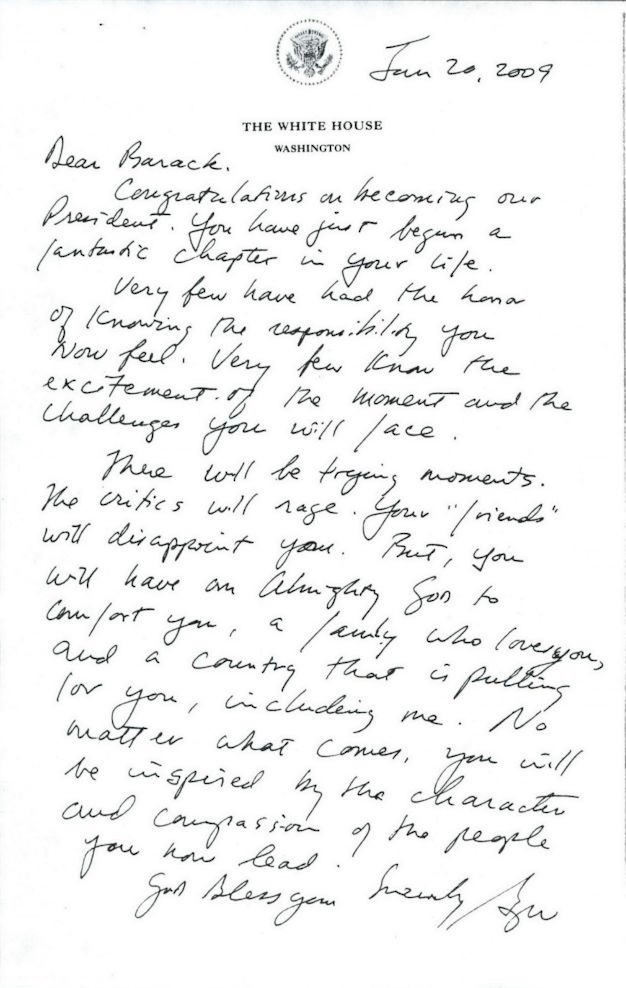