HAVING FAITH IN THE SYSTEM 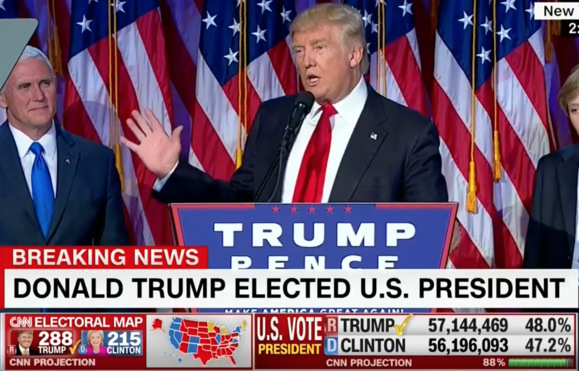 I don’t know about you, but over the past couple of days I have been avidly following left-leaning political commentators and Hillary supporting pundits, to see what they have to say about Tuesday’s unexpected election result.

Unsurprisingly, for most of them Donald Trump’s victory represents nothing less than the Apocalypse. They believe that America as we know it is doomed, and all the progressive advances in social policy made by previous administrations are in grave danger.

Strangely enough, it is not the dreadful future they believe is ahead of us that bothers them most. What concerns them even more is that they did not see it coming. Being blindsided by what they believe is a cataclysmic catastrophe seems far more difficult for them to accept than the result itself.

As Ben White, Chief Economic Correspondent of the political news website Politico summed it up: “There is simply no way to assess at this early moment what a Trump presidency will look like. There is only the opportunity to reflect on how so many of us got this whole election wrong for so long.”

Underlying much of this handwringing, and the protest demonstrations that have sprung up in cities across the country since election night, is a feeling that the result is an unjust aberration. The mere fact that an outcome they consider irrational and beyond the pale of decent democracy was unforeseen by any of them, delegitimizes Trump’s victory in their eyes, as if only someone who plays by their rules has a right to the presidency.

Had it been Jeb Bush, or Marco Rubio, or Ted Cruz, while their victory may have been disappointing, it would have at least been acceptable. But Trump? A man who until his presidential bid barely flirted with mainstream politics and political process? Whose rhetoric and persona are an affront to mainstream political discourse and behavior? How could his election to highest office be right?

For those not caught up in the intense goldfish bowl of support for either candidate or party in this race, the rapid descent by Clinton supporters into what amounts to an anti-democratic populist dismissal of Donald Trump’s election victory is utterly remarkable, and quite alarming.

The very people who take great pride in their championing of democracy, and who have spent the past year or more lambasting Trump’s disdain for democratic values, at least in the way they understand them, now find themselves with the shoe very firmly on the other foot. And besides for a remarkably gracious Hillary Clinton, and an incredibly courteous President Obama, most of Trump’s opponents have rapidly morphed into the very thing they claim to abhor.

Those who hated Donald Trump for delegitimizing President Obama using the “birther” argument are now marching on the streets with placards proclaiming: “Trump is not my president”.

How ironic. How would these same people have reacted had Trump questioned the election result if Hillary had won, as he threatened he would, and his supporters would then have marched on the streets with placards proclaiming “Hillary is not my president”?

The hallmark of our patriarch Abraham, to whom we are introduced in this week’s Torah portion, was “chessed”, a Hebrew word usually translated as “kindness”.

But our vision of Abraham as an avuncular kindly figure, always eager to be charitable and generous, totally passive, and abhorrent of violence and inequality, does not fit comfortably with some of the narratives we have in the Torah that describe him.

Among other things, he abandons his family to emigrate to a distant land; he fabricates a subterfuge in Egypt; he evicts his nephew Lot and dispatches him to Sodom; later on he vanquishes four warlords and their armies in a military campaign to save his nephew; and he banishes his own wife and son, Ishmael and Hagar, to appease Sarah.

None of these acts accord comfortably with the concept of pure “kindness” – kindhearted people simply don’t do these things.

But the word “chessed” doesn’t just mean kindness. It combines a number of ideas, among them kindness, mercy, and steadfast-loyalty. It is a word always used in the context of God’s relationship with his covenanted nation, the Jews.

God’s relationship with us, despite our unpredictability, is the epitome of “chessed”. Abraham’s attitude towards life was a reflection of this Divine attribute. Not everything is fair. Inequality abounds. Bad stuff happens.

Occasionally the way to address it is through unbridled kindness. But at other times “chessed” might require distance, or toughness, or even intervention. Nevertheless, the one constant has to be loyalty and allegiance. There is no such thing as fairweather “chessed”.

Abraham exemplified this ideal. Sometimes his devoted relationship with God demanded tough decisions and difficult choices, leading to the ultimate test of the “akeida” – when God asked him to sacrifice his son Isaac and he assented, although this act was later aborted.

Abraham didn’t reject God simply because the “akeida” went against the humanity and humanism he aspired to. Kindness and compassion, as we understand them, can never be allowed to become a dictatorship that destroys our faith.

The democracy of our great country is the cornerstone of our freedom. Undermining our democracy by questioning an election result is to succumb to a new form of dictatorship, one that undermines democracy and freedom. Our loyalty to democracy has to come first and foremost.

The job of U.S. President is bigger than one man, and democracy is more important than the result of one election.

For the greater good, it is time for Hillary’s supporters to embrace this week’s result and move on, even if they never believed it would happen.