DON’T CONFUSE ME WITH FACTS 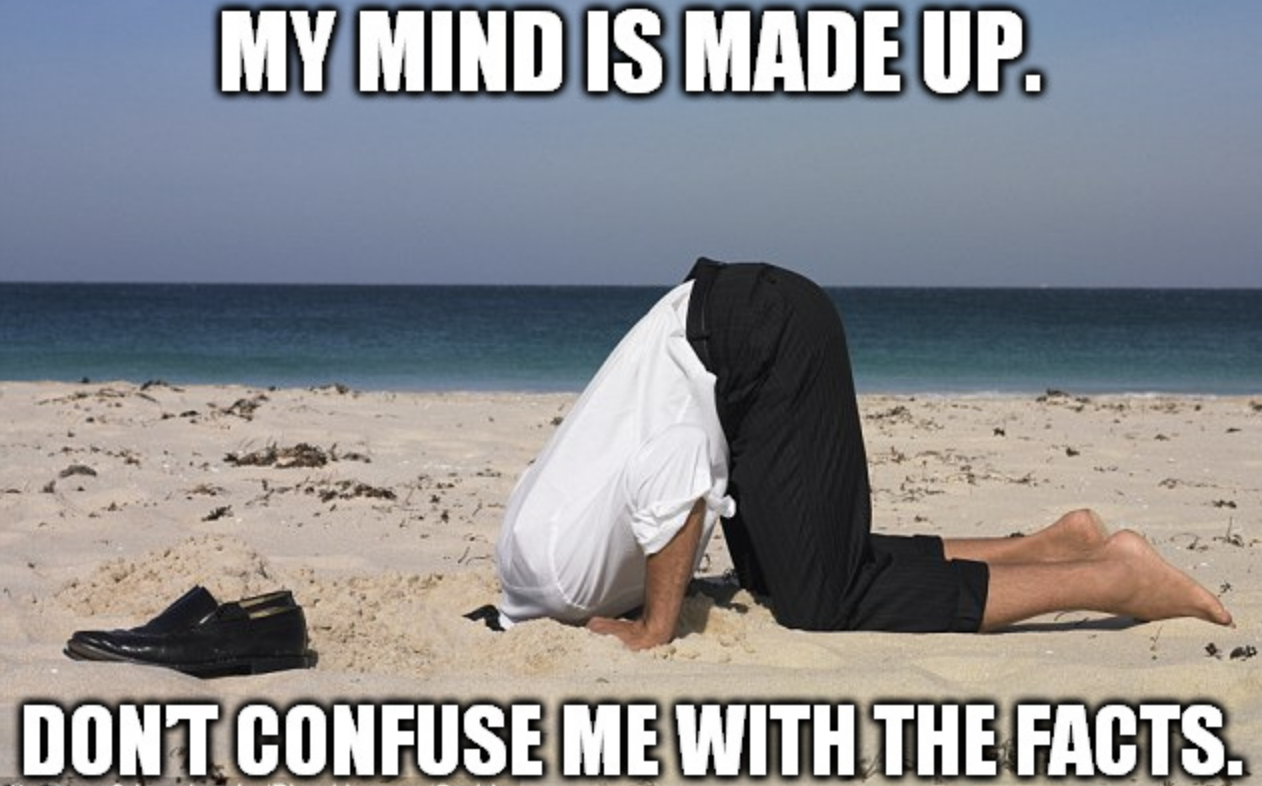 In his seminal 1869 essay, The Subjection of Women, the celebrated nineteenth-century British social philosopher John Stuart Mill wrote, “So long as an opinion is strongly rooted in the feelings, it gains rather than loses in stability by having a preponderating weight of argument against it.”

One wonders whether Mill prophetically foresaw all of those who rage on the internet and social media, for whom facts are summarily dismissed as fake news while only opinion matters.

In November 1945, the advertising industry journal Advertising & Selling published an article that described a meeting between a group of ad agency executives and one of their clients.

Having presented a market survey which clearly showed how the promotional policies their client was following were disastrous for his company, the client nonetheless told them he wanted to continue with the current strategy.

“But how can you say that in the face of all this evidence?” they asked him.

Undeterred, he replied simply: “Don’t confuse me with facts!”

This remarkable line somehow entered popular consciousness as the ultimate example of self-defeating irony, most famously as the desk sign: “My mind is made up – don’t confuse me with the facts!”

Shockingly, this bizarre riposte has now made the return journey from the sphere of humor, and lodged itself firmly back in the real world – or as real as one considers the social media world to be.

Some years ago, as an avid collector of Jewish polemical publications, I noted the difference between a thesis and a polemic.

It dawned on me that a thesis is the attempt to draw conclusive information out of all the available evidence. Meanwhile, a polemic is trying to deliberately use carefully selected evidence to support a predetermined conclusion.

What has become notable in recent years is that much of the discourse on all matters of public concern – particularly but not exclusively on social media – is self-evidently colored by a polemical handicap, despite being presented as utterly factual and impartial.

And all of this without so much as a hint of irony.

I was not yet an adult at the time of the Watergate hearings, but I have read numerous books and articles on the subject of Richard Nixon’s impeachment, although none more jarring than the 2004 interview with G. Gordon Liddy, chief operative of the so-called “White House Plumbers” unit, who was convicted of conspiracy, burglary, and illegal wiretapping for his role in the Watergate break-in, and served almost five years in jail.

“The official version of Watergate is as wrong as a Flat Earth Society pamphlet,” Liddy snapped at journalist Johann Hari after she gingerly broached the subject of his infamous role in the affair.

He went on to tell her that the Watergate burglary was never about Nixon winning the ’72 election, but was actually the brainchild of White House Counsel John Dean’s efforts to find and destroy evidence of his fiancée’s involvement in criminal activities.

The most remarkable aspect of this ludicrous claim is not its outrageousness – although it is indubitably outrageous – rather it is that the claim was made in the heat of anger well over 30 years after the events took place.

The danger of involving feelings when it comes to disagreements and disputes is that they turn what is possibly legitimate into something rancid and destructive, leading to smoldering hatreds that long outlast any meaningful aspect of the matter at hand.

Leaders and opinion formers have a sacred duty to all of those whom they influence to temper their public utterances, so that any harm done by the fray is short-lived, mitigated by their dignity, rather than aggravated by a public display of emotion.

The inevitable alternative is that the argument will long outlive the issues that caused it in the first place.

One of the notable quarrels recorded in Genesis is the territorial dispute between the shepherds of Abraham and those of his nephew Lot. It would appear from the text that they found it difficult to occupy shared land, ultimately resulting in a firm parting of ways arbitrated by Abraham.

The verse recording the breakdown includes a curious repetition (Gen. 13:6): וְלֹא נָשָֹא אֹתָם הָאָרֶץ לָשֶבֶת יַחְדָו כִּי הָיָה רְכוּשָם רָב וְלֹא יָכְלוּ לָשֶבֶת יַחְדָו – “the land could not support them staying together, for their possessions were so numerous; and they could not remain together.”

At first we are told the facts – Abraham and Lot’s shepherds could not live alongside each other as there was not enough land for all of their flocks to graze.

But then the verse repeats itself, adding yet again that they could not remain together.

Rabbi Simcha Bunim Sofer, in his commentary on Lech Lecha, notes that this is the classic, if tragic, trajectory of all arguments. Initially there is a valid reason for the disagreement, one that could be resolved without rancor if cool heads prevailed.

The shepherds of Abraham and Lot certainly had legitimate concerns; they were rightfully worried about how the land they lived on could comfortably support their owners’ ever-increasing flocks. With sensitivity and finesse this problem could certainly have been resolved amicably. But what began as a valid dispute soon degenerated into wanton hatred – it no longer had anything to do with the facts, rather it was a matter of “they could not remain together.”

And at that point the only available option was complete separation – an unbridgeable gulf that led to a pointless rift between two close family members, and resulted in the descent of one of them into the degenerate world of Sodom and Gomorrah.

I have no doubt that had social media existed in that era, the self-righteous shepherds would have blasted their “facts” all over Twitter and Facebook, feeling entitled to prove their point-of-view, enraged by their adversaries’ audacious refusal to see things their way.

Antonio, the title character of William Shakespeare’s Merchant of Venice, declared that “the devil can cite Scripture for his purpose.” (Act 1, Scene 3). It is so true.

The shepherds on both sides of this dispute could have tweeted: ‘even the Torah says we cannot remain together’. But I fear they would have been missing the point entirely.