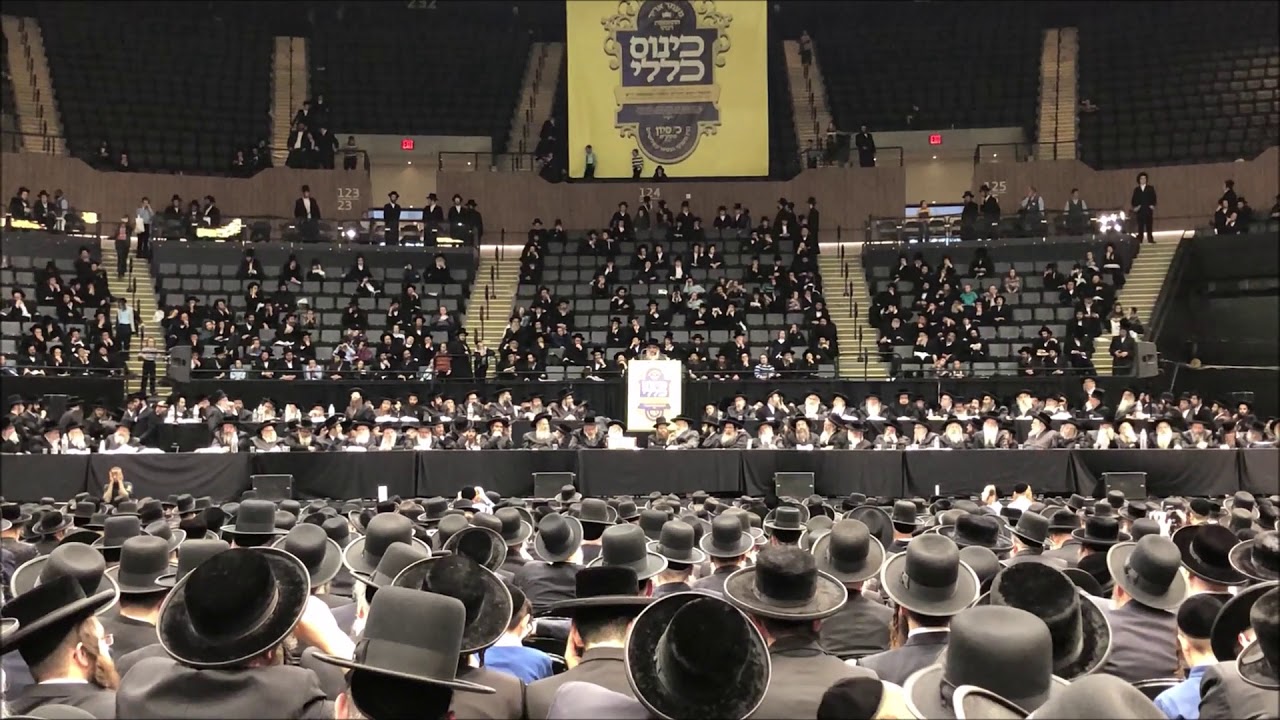 Earlier this week thousands of Satmar Hasidim gathered at the Nassau Coliseum in Long Island, for an event led by the Satmar Rebbe, Rabbi Aron Teitelbaum.

The purpose of the rally was to reassert Satmar’s rejection of Zionism, along with their continued non-recognition of the State of Israel.

The climax was an address by Rabbi Teitelbaum, who spoke for just under one hour and twenty minutes. During his impassioned if somewhat rambling speech – subsequently made available online, despite platitudinous declarations against online technology made by speakers at the event – Rabbi Teitelbaum reviewed Satmar’s jaundiced version of Zionist history over the past century, and contended that the concept of a Jewish state is antithetical to Judaism.

Ironically, he lamented the fact that in recent years Satmar devotees were openly happy when Israel succeeded on the international stage and in military campaigns. How is it possible, he asked, that the spiritual heirs of the ideology espoused by the Satmar sect’s founder, Rabbi Yoel Teitelbaum (1887-1979), could find anything positive to say about the State of Israel and its Prime Minister? Especially, he added, when the late rebbe had predicted that anyone who celebrated Zionist triumphs would not merit to rejoice in the coming of the Messiah.

Truthfully, as a religious and deeply committed Jew, it is hard to know how to respond to this kind of hostility towards Israel by such a large and important group of orthodox Jews, many of them deeply sincere, when it is so clear that Israel represents the most important theological development for Judaism in thousands of years.

While one can understand how rabbis during the early years of Zionism, and even after 1948, might have been concerned by the very secular nature of the Zionist leadership, and their callous rejection of any Jewish traditions or beliefs that did not dovetail with Zionism, it is clear that the situation has moved on in every sense. Searching our heritage for obscure references to prove that Jewish self-determination is forbidden before the Messiah’s arrival is the worst kind of self-defeating futility. Can’t they see the truth? God has provided us with our very own sovereign country, in the very land that was promised to our forefathers, and in exactly the way that was predicted by our earliest prophets.

No, Satmar Rebbe, it’s not those Satmar Hasidim who celebrate Israel’s successes who have got it wrong – it’s you and whoever wasted the money to pay for the Nassau Coliseum to stage this retrograde rally who have got it wrong. You and your fellow-travelers are living in a time warp, unable to climb down from your rotting anti-Zionist tree to join the vast majority of Torah-true Jews who have no difficulty recognizing Israel and its existence for the prophecy-realizing miracle that it so clearly is.

The issue I really grapple with is whether or not religiously observant Jews who reject the State of Israel and decry its existence actually believe in God. After all, how can one reject the realization of prophecy, and the miraculous nature of Israel’s sustained survival, and still believe in the God who gave us the very Hebrew Scriptures which contain the blueprint for everything that has unfolded and continues to unfold before our eyes?

Intriguingly, I came across a commentary by Rabbi Moses Sofer of Pressburg (1762-1839) on the portion of Shlach that seems to address this exact point. The reason I find it so intriguing is because the intransigent zealotry of orthodox anti-Zionism has its roots in an absolutist interpretation and adoption of the “legacy” of Rabbi Sofer by a faction of his followers during the second half of the nineteenth century.

The reaction of the Israelites to the negative report delivered by the spies upon their return from Canaan, and their insistent demand that the nation return to Egypt (Num. 14:3-4), prompts Rabbi Sofer to question their true commitment to God. Having received the Torah at Sinai in the knowledge that their next destination was the Promised Land, their desire to abandon this mission on the basis of some worrying information, and to return to the land where they had suffered slavery and persecution, can surely only be interpreted as an explicit rejection of God.

But Rabbi Sofer dismisses this analysis as a profound misunderstanding. On the contrary, this entire episode is a primary example of misusing God and religion in the pursuit of deviant goals. The spies came up with countless reasons why going back to Egypt was exactly what God really wanted – the exile had not yet expired; the Israelites had only come into the wilderness to receive the Torah, and now it was time to return to Egypt; God would miraculously empty the Promised Land of its inhabitants, and then they would take it over, but meanwhile they should wait in Egypt.

The Israelites who listened to this group of distinguished holy men addressing them that day at the Sinai Desert’s version of the Nassau Coliseum lapped it all up, and became utterly convinced that God wanted them to return to Egypt, believing that it was Moses who had got it wrong, not them, and certainly not the ten esteemed princes of Israel.

As it turned out, what the spies perpetrated was a gross misuse of religious influence. Almost as soon as they had fallen for the lies of the spies, the nation realized their mistake and attempted to launch their own invasion of Canaan. But it was too late. The military campaign was a disaster, and it would be forty years before they were able to enter the land.

When religious leaders misuse religion and our devotion to God to promote ideologies that are offensive to God, we must immediately call them out and redouble our efforts to stay in lockstep with God’s mission, as expressed to us by our most revered prophets and texts.