A PRAYER FOR EATING CHOMETZ 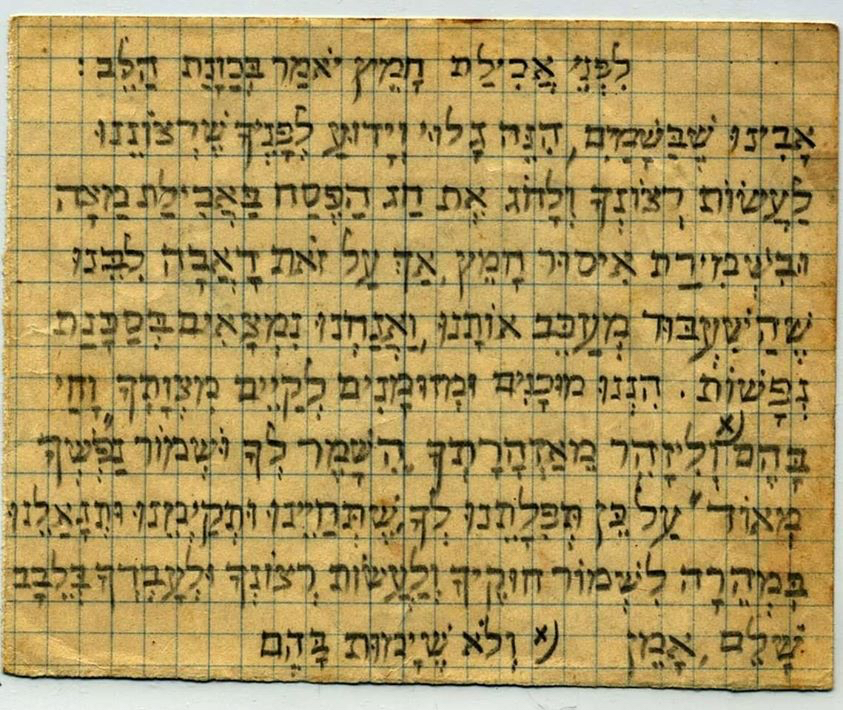 In 1943, Rabbi Aharon Davids was the highly revered and much admired Chief Rabbi of Rotterdam when the Nazis deported his entire community to the Westerbork concentration camp in Holland. Within a matter of months, in early 1944, all of Rotterdam’s Jews were taken from Westerbork to Bergen-Belsen.

Conditions in Westerbork had been very difficult, but at least religious observance had been somewhat possible, helping to preserve the dignity of the Jews, and also their will to live. But when they arrived at Bergen-Belsen, families were divided, and their meager possessions were confiscated. Within a short time, the killings began, and deadly disease became rampant. Each day, more people were getting killed or dying. Spirits sank, and despair set in.

With Pesach approaching, Rabbi Davids realized that he had to rally his family and community – at least, those who still remained alive. Obviously, this was not going to be an ordinary Pesach. It would be impossible for them not to eat hametz during the week of Pesach, as their tiny daily ration of bread was crucial to their survival. And – there would be no matzah and no Haggadahs.

But Rabbi Davids knew that it was not just important for him and everyone else to have a Seder, it was crucial. And so, on the first night of Pesach, Rabbi Davids gathered everyone into a group, and they sat down together for a “Seder.”

The rabbi recited as much of the Haggadah as he could from memory. When he reached the point when one is supposed to make a bracha over the matzah, he took a piece of bread in his hand and in an emotional voice he said:

Avinu Shebashamayim, our Father in Heaven: you know and are fully aware that we want to carry out the commandment to eat matzah, and that we don’t want to eat hametz on the Festival of Pesach. But regrettably, we are prevented from doing what we want because of the oppression and deadly danger in which we find ourselves.

Therefore, our prayer to You is this: keep us alive, sustain us and redeem us speedily, so that we may observe your statutes, carry out Your will, and serve You wholeheartedly. Amen.

And as soon as he finished this spontaneous prayer, Rabbi Davids made the prescribed blessing for bread and ate his tiny piece – and everyone else in his group did the same. It was a very emotional moment. Through flowing tears and with the heaviest of hearts, Rabbi Davids and his family, together with their congregation, observed Pesach that year in Bergen Belsen – by eating bread.

Tragically, Rabbi Davids and his son Eli died in Bergen-Belsen, shortly before it was liberated by the Allies. But his wife, Erika, and their daughters survived. In 1947, Erika Davids, together with her daughters, immigrated to the Land of Israel. Each year until her passing in 1997, her family would repeat the prayer Rabbi Davids had said at the Seder in Bergen Belsen, reading from a scrap of paper on which this extraordinary declaration of faith was recorded immediately after their liberation. Even today, the Davids family continues with this poignant tradition, a testament of faith in the midst of the hell of the Holocaust.

Remarkably, Rabbi Davids knew that doing the Seder properly that year was not going to be possible. Nevertheless, with unimaginable courage, he began the Seder anyway. And it was a Seder never to be forgotten; a Seder that lives on in his family – and for all us.

“Bekhol Dor Vador Omdim Aleinu Lekhaloteinu.” In every generation they rise up to destroy us.

Rabbi Davids’ mother was Rosa Dunner, first cousin of my great-grandfather, Baruch Chaim Dunner (who was murdered at Auschwitz in 1944). Rosa Dunner was the daughter of Rabbi Josef Hirsch Dunner (1833-1911), Chief Rabbi of Holland.